We may intervene in Syria 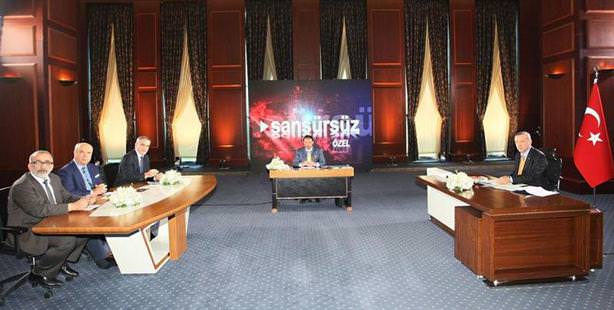 Prime Minister Erdoğan answered a series of questions on the ‘Sansürsüz Özel’ program broadcasted live on the Kanal 24 television station.

The show, moderated by Yiğit Bulut, had a series of journalists asking Prime Minister Recep Tayyip Erdoğan pressing questions. The prime minister began by discussing Syria, the hottest topic on the agenda.

The following was Erdoğan's response to the question, 'Where is Syria headed?'

-"The developments in Syria are not what we approve of. We had very good relations. Ever since the day I took on this position Assad and I had a family-oriented pleasant relationship. However, the steps discussed for eight to nine years remained amongst ourselves. In the beginning of 2011, I had a three to three and a half hour meeting with him where I said there needs to be an environment where the public is able to put forth their own will. The public is interested and involved with you; this could be turned into an opportunity.

We also sent them a program on development. However not a single step was taken. At present, Assad has lost administrative authority. Opposition forces are now in control. Currently, in the northern part of Assad's area there are steps being taken as if a Kurdish state had been established there. It is not possible for Turkey to be in favor of any sort of collaboration with the PKK there. We are placed in a position of being between this settlement and our sensitive balance. We are not just going to say all right to this. If Syria divides there will be sectarian tension.

-When it comes to Syria, we are unable to give any sort of date this will come to an end. Moreover, we are not a part of this. However, this atrocity needs to come to an end as soon as possible. At present, all of Syria has been destroyed. There have been over 20,000 deaths. This is what we have determined thus far. There have been over 200,000 migrations. We think there may be about 100,000 refugees; they will continue to come here. Right now, the Assad administration is stuck in Damascus. In other areas, the opposition's influence is dominant. The north has now gone to the Kurds. There is a settlement there. It is impossible at present to estimate how many more lives will be lost with this structure.

- The operations we stage from time to time in Northern Iraq are a product of our defense. Nobody can say anything about this. Turkey will do whatever necessary if Syria becomes a threat of terrorism. Our only desire is for the problem there to come to an end. Right now we are watching what is happening on television. The situation is bad. The opposition forces are taking their final steps. The Assad administration has been squeezed into the city center. The situation in all other regions is that the opposition forces are in charge. Some areas have been taken over by the terrorist organization. We will take action if the terrorist organization stages any sort of attack from where they are positioned. This is our most natural right.

- Syrian citizens are our brothers; however the regime is practically an enemy. Our sensitivities when it comes to terrorism are well known. We cannot accept this sort of structuring. Our nation becomes under threat and we cannot remain spectators to this.

- Our old friendship with Assad is over. At present, even Iran has lost hope. The Russians are also issuing statements that they will not accept the use of chemical weapons."

* There have been 20,000 deaths in Syria. This is not acknowledged in Turkey and it is said that Erdoğan doesn't want Assad due to his sect. What are your thoughts on this?

- "This is unacceptable for us. Our beliefs place priority on people not sects. This is what our religion dictates. No one says there are Muslim deaths there, they say that people died."