Erdoğan: We will not allow the PKK to be harbored in Northern Syria 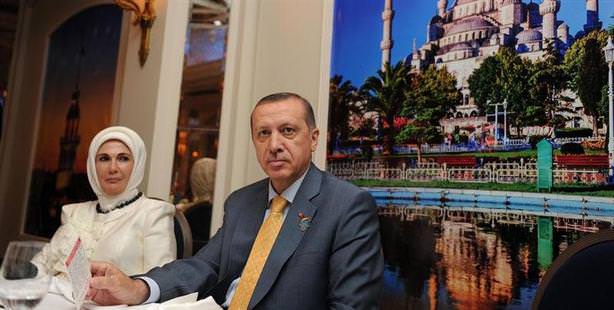 Prime Minister Erdoğan states Turkey will not be permitting the PKK to set up camp in Northern Syria and says Davutoğlu will be releasing a final warning on the issue.

"There is no way we can just allow a terrorist organization to camp out in Northern Syria," states Prime Minister Tayyip Erdoğan on his way to London. Erdoğan went on to state that Foreign Affairs Minister Ahmet Davutoğlu will be heading to Northern Iraq to relay Turkey's sensitivities on the issue.

Erdoğan emphasized that after this final warning is issued, Turkey will no longer hold any responsibility. As for the steps Ankara may take, Erdoğan summarizes by stating "A safe zone, a buffer zone, the camps that we have established thus far… these are all some of the alternatives."

The following are a number of messages delivered by Erdoğan while en route to London:

'WE WILL NOT TOLERATE THIS'

"There is no way we will tolerate a terrorist organization setting up camp in Northern Syria and therefore establishing a threat risk for our country. We are taking all of the necessary measures on the issue. Our armed forces and all other departments related to the issue are currently in preparation and upon a directive given to my Foreign Affairs Minister on Wednesday at the latest; Davutoğlu will be going to Northern Iraq where he will meet with officials from the local administration in order to share our sentiments, determination and sensitivities on the issue. After that, we want it to be known that we will no longer hold any responsibility on the matter.

At present, there is a Syrian National Council (led by one of our Kurdish brothers) and therefore to establish a Syrian National Kurdish Council would be a mistaken approach. Besides, Northern Syria does not solely consist of our Kurdish brothers; there are also Turks and Arabs. Nobody should try to provoke us; we will not play that game. However, if there is a step needed to be taken against the terrorist organization, we are definitely ready to do so."

(When asked "Has Turkey's trust in Northern Iraq been rocked" Erdoğan responded by sharing the messages Foreign Affairs Minister Ahmet Davutoğlu will be relaying in Northern Iraq.)

"Look, our sentiments of trust should not be harmed at this point. We do have trust; however you should not contribute to wrong steps being taken here. Just the opposite, let's erase the errors made. Let's take the step of rectifying the mistake together. However, in the contrary, we will not simply allow for the PKK-PYD solidarity on Northern Iraq to act according to imaginary map lines there."

(In response to the question, "Are you considering setting up a buffer zone or other alternatives in the case of risk posed by the PKK?)

"Setting up a secure zone, a buffer zone and the camps we already have set up are all amongst the alternatives. As to which one is a priority will be dependent on the developments. The Foreign Affairs Ministry, our Armed Forces and intelligence organizations are all working intensively together and will make the decisions and take the necessary steps when the time comes. In other words we are on boiling ground.'

Pointing out that the regime in Syria has already begun to lose their power, Erdoğan stated, "Assad and those around him are on their way out in Syria. The nation is now preparing for a new era; however the question of 'what will happen' has become a delaying tactic for some. I say, what happens should be up to the public and it will be."