'We need to work in coordination against this regime' 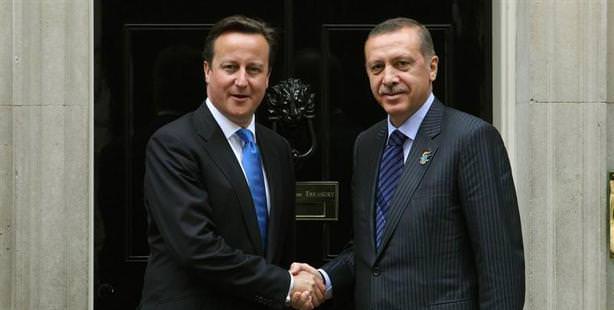 Prime Minister Erdoğan, who met with British Prime Minister Cameron in London, commented on the impending onslaught by Assad in Aleppo by stating, “My hope is that the regime will get the answer they need from the real sons of Syria.”

Prime Minister Tayyip Erdoğan met with British Prime Minister Cameron on his second day in London. After an approximately one-hour long discussion, the two leaders reached a consensus on increasing pressure on the Syrian regime. While Erdoğan and Cameron discussed the current information coming in on Aleppo, Erdoğan stated, "International institutions need to work together. We have to be ready for a major massacre in Aleppo at any moment." Cameron expressed that he is also closely following the conflict in Aleppo and stated, "The international community cannot remain indifferent to this." The two leaders agreed to increase pressure on Russia, to ensure the international community is made aware of the sensitivity of the issue and to continuously remain in contact with one another regarding the situation with Assad.

Arriving to London for the Olympics, Erdoğan broke his fast for Ramadan at his hotel and then paid a visit to the London Kahve Dünyası branch. Yesterday, Erdoğan attended a Friday prayer ceremony at the Sheikh Kasım Bin Al-Thani Mosque. Upon his exit, the Prime Minister commented on the news that the Assad administration was preparing to stage a serious strike on Aleppo. "I am continuously discussing the issue with our Foreign Affairs Minister. My hope is that the regime will get the answer they need from the real sons of Syria."

A CALL FOR A COALITION


Erdoğan's meeting with England's Prime Minister Cameron took place later that day. Speaking at a joint press conference following the meeting Erdoğan commented on the situation in Syria by stating, "The most recent developments in Syria have now truly reached a level of inhumanity. There is a regime there that kills and massacres its own people.

We must become a coalition and join forces against this regime. Whether it be the United Nations Security Council, the Organization of Islamic Cooperation or the Arab League, we need to take much more significant steps during this period of time. Furthermore, when you consider the build up in Aleppo and the recent statements regarding the use of weapons of mass destruction, these are actions that we cannot remain indifferent to." Britain's Prime Minister Cameron stated, "The very real concern that we have is that the Syrian regime is about to carry out some truly appalling acts in the city of Aleppo."

A WARNING ON MYANMAR

Erdoğan also pointed out that there is an ongoing massacre in Myanmar. "Unfortunately they are suffering a massacre, starvation and devastation. Despite this I still believe that all nations who care for humanity will help and I invite them to. We need to join forces to do all that we can here."

During the meeting, Cameron and Erdoğan also discussed the EU, Iraq and the developments resulting from Arab Spring. While both leaders decided to continue collaborating in order to increase joint trade volume between the two nations. Cameron reiterated his pledge of support for Turkey by stating, "We have a very strong political relationship. We have always supported Turkey's EU accession process. We also want there to be significant progress on this issue." Erdoğan in return, thanked Cameron for his support.