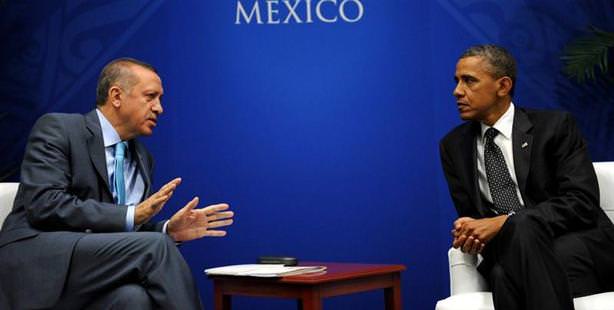 Erdoğan held a telephone conversation with U.S. President Obama to discuss the recent developments in Syria.

Prime Minister Tayyip Erdoğan made a telephone call to United States' President Barack Obama yesterday to discuss the current developments in Syria. The 36-minute conversation was the first time the two had spoken since meeting in Mexico on June 19th.

During the critical discussion, transpiring just before Foreign Affairs Minister Ahmet Davutoğlu's trip to Northern Iraq tomorrow, Erdoğan briefed Obama on the PKK-connected PYD's activities in Northern Iraq. Erdoğan stated that Turkey would not allow for any sort of development in the northern part of Syria that poses a threat to Turkey. The two leaders evaluated the involvement of the regional Kurdish administration in Northern Iraq and Erdoğan announced that he would be sending Davutoğlu to Erbil to meet with Barzani.

Erdoğan also stated that the process of establishing a transitional government in Syria needs to be accelerated and requested support on this issue.

An announcement released by the White House stated the two leaders spoke by telephone "To coordinate efforts to accelerate a political transition in Syria, including the departure of Syrian State Leader Assad and responding to the legitimate demands of the Syrian people."