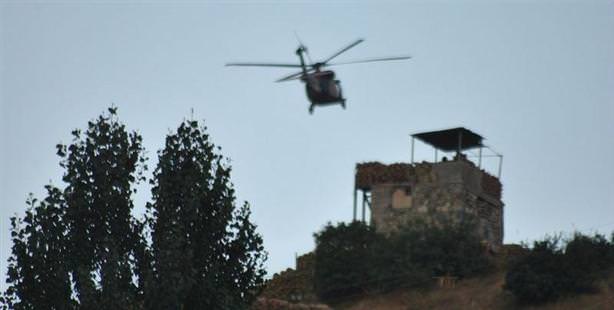 SABAH has acquired crucial details regarding the ongoing military operation on the PKK terrorist organization in Hakkâri’s Şemdinli district.

The military operation, which has been going on for days now is honing in on the hundreds of PKK groups which have dispersed amongst the region. Turkish security forces caught wind of the PKK's intentions to stage a series of simultaneous attacks in Şemdinli and Çukurca in an attempt to cover up the significant loss in casualties suffered by the terrorist organization's Şemdinli raid on September 11, 2011. Security forces were informed of the PKK's plans to attack military and police members by smugglers operating in the region. Security forces have since uncovered that a significant number of terrorists have arrived to the Şemdinli and Çukurca districts from the Hakurk, Ari, Avaşin-Basyan, Hınere and Kanirash camps in Northern Iraq.

GROUPS ARE DISTRIBUTED THROUGHOUT THE REGION

One of the most important regions targeted in military operations as a result of the intelligence received is the rural area of Şemdinli's Yiğitler Village where a 50 member group of terrorists are positioned. One of the areas with the highest concentration of terrorists is the Şemdinli Mountain region located along the border with Iran. This is also where the 120 to150 terrorists, who were responsible for staging a series of attacks in the Hakkâri region, are being harbored. The PKK also operates a makeshift Berikasım court in order to rectify internal issues. Military operations have now intensified in Şemdinli's Öveç, Boğazköy and Mağaraönü. In these areas alone, there are approximately 270 to 350 PKK terrorists being harbored in groups.

The military offensive against the PKK, started over a week ago, has now intensified in the Gamon Mountains. Drones are being used to assist in locating the terrorists. At night F-16's and during the day Cobra helicopters are deployed to bomb terrorist units. Two thousand security forces, including Special Forces police, gendarmerie teams and village guards have cornered the PKK members. The terrorists, unable to escape or hide out in caves, are suffering significant casualties. This most recent slew of operations has resulted in the deaths of 39 terrorists thus far and that figure is expected to rise. Meanwhile, deputies from the Peace and Democracy Party have not been permitted access to the area.

A crucial bridge located on the Yüksekova -Dağlıca highway was recently exploded by PKK members. The night before last, terrorists placed explosives under the bridge, located nearby the Yeşiltaş village, which they detonated with a remote device. The bridge collapsed in the explosion resulting in restricting military access to the villages in the region.