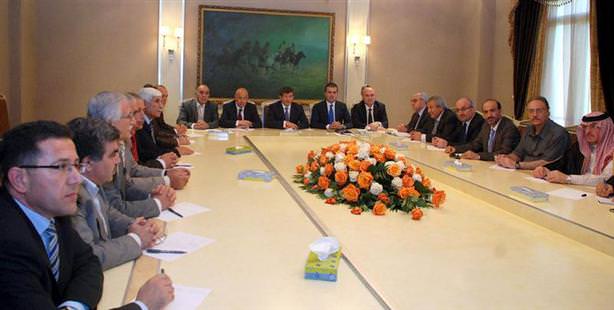 Meeting with Syrian Kurds in Erbil, Davutoğlu stated, “Assad has usurped your rights.” The PKK’s extension, PYD was not welcomed at the meeting, during which Syrian Kurdish National Council Chairman Bashar stated they would not allow the PYD’s presence in the region.

SABAH has acquired details of Turkish Foreign Affairs Ahmet Davutoğlu's meeting with Syrian Sunni Arab and Kurdish opposition members in Erbil. The meeting took place on the second day of the foreign affairs minister's trip to Erbil and Kirkuk. Leader of the Kurdish Regional Administration Massoud Barzani mediated during the approximately two-hour long meeting, which took place following Davutoğlu's trip to Kirkuk. The PYD, an extension of the PKK operating in Syria requested to attend the meeting, however the Turkish committee refused. Davutoğlu openly expressed that they considered the PYD's connection to the PKK to be a threat for Turkey.

Syrian Kurdish National Council Chairman Abdülhakim Bashar assured Davutoğlu that they would not allow the PYD to have control over the region. "They need to put Kurdish interests over their party's interests. However, that's not what they are doing," said Bashar. Emphasizing that they do not want to go against Turkey, Bashar stated that they do want autonomy. In a previous statement made by Bashar he had said, "We uphold the Kurdish Regional Administration as an example and not the situation with the Kurds in Turkey." Davutoğlu reminded that Turkey's issue is with terrorism and when it comes to security the nation will take every precaution necessary. One of the Kurdish opposition representatives stated, "The flags raised by the PYD do not in any way represent Kurdish independence, control is still in the hands of Assad."

'DO NOT FORGET THE OPPRESSION'

During the meeting, Davutoğlu emphasized the importance of the Syrian National Council and the Syrian Kurdish national Council acting together. "Your rights were usurped by Assad. It was the mentality of the Baath regime that refused to even give you identification for years. Do not forget this. Become unified in order to acquire your democratic rights," were the messages delivered by the foreign minister.

"THIS IS A FIRST FOR TURKEY"

Syria Kurdish National Assembly Chair İsmail Reşad Heme expressed his surprise that Davutoğlu held this meeting. "If you want to know the truth, we never believed he would sit down at a table with us. This is the first time that Turkey has had a positive stance in regards to Syrian Kurds. During this meeting we learned that Turkey is not against the solidarity of Kurds within Syria's territorial integrity. We saw that they consider the Syrian National Council to be the representatives of the Syrian public and perceive us to be the representatives of Syrian Kurds. We also learned that as long as we act in conjunction with the council, they will offer us their support. To be honest, we did not believe that Davutoğlu was going to say something like this. What has come out of this is this; Turkey now equally considers all segments in Syria. When we evaluated the meeting after it concluded, we came to the conclusion that Turkey's new positive stance was a first. We want for this stance to continue. They asked us to attend a meeting of the Syrian opposition planned to be held in Istanbul soon."

During the meeting which both Massoud Barzani and Nechirvan Barzani attended, both sides offered assurances. Davutoğlu stated that Turkey would not tolerate the PYD establishing a new autonomous structure in the region. Referring to the PYD as acting opportunistic, Davutoğlu expressed the discomfort felt due to any cooperation with the PKK. Pointing out Turkey's support for Northern Iraq's economic expansion, Davutoğlu expressed their discomfort that the PYD is training their militants there. Barzani promised to act together against terrorism and went on to emphasize that the Kurds in Syria have suffered for years while delivering the message, "Do not turn your backs on the Syrian Kurds." Davutoğlu promised that they would offer their support for all segments to acquire their rights in the new Syria and assured, "We are not against the Kurds; we are against terrorism."