Assad is behind the PKK terrorist organization 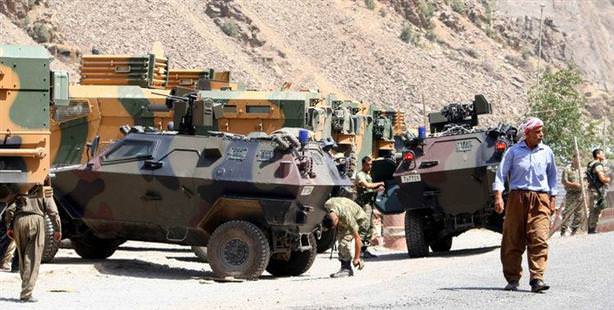 On Saturday evening, the PKK used the Syrian RPG-7 rocket launchers to stage three simultaneous attacks on Turkish military outposts in Çukurca killing six soldiers and two village guards. Supposedly there were Syrian nationals amongst the terrorists who staged the attack. This means of course, that the allegations, that as the chaos and strife ensues Syria has been offering support to the PKK terrorist organization, have been verified. Security sources state that once the Bashar Assad administration abandoned northern Iraq to the PKK affiliated, they also began providing arms support. Coordination between the PKK and Al Mukhabarat was supposedly arranged by Halaf El Muhammed, aka Sofi Nurettin, a Syrian national who recently took over leadership of the HPG, one of the PKK's military wings.

Security sources state that the heavy weapons provided by Syria were the ones used in this weekend's attack which resulted in the deaths of six soldiers and two village guards. Amongst the information coming in is that the terrorist organization has set up weapons depots in the Ayn Al Arap and Afrin regions, and used the RPG-7 rocket launchers provided by Al Mukhabarat in Saturday's attack. The latest intelligence reports also state that Assad has very clearly expressed that he has abandoned the northern region of Syria to the PKK terrorist organization.

On September 11th, 2011, the PKK staged simultaneous attacks on a number of public establishments in Şemdinli, however the terrorist organization suffered significant casualties. Intelligence units have uncovered that the simultaneous attack staged in Çukurca was an attempt by the PKK to make up for the Şemdinli debacle. The organization started stockpiling ammunition and bringing in terrorists to Şemdinli and Çukurca. When the Turkish Armed Forces began staging a series of operations in Şemdinli, the PKK's plans fell to the wayside. It took them up until Saturday night to realize their plan of attack, which they did in Çukurca. The terrorist staged a simultaneous attack on three military outposts, one in Geçimli along the Hakkâri -Çukurca Highway and the other two Çukurca. Six soldiers and two village guards were killed in the attack, while 15 soldiers and six civilians were wounded. Fourteen terrorists were also killed in the attack. SABAH has acquired special details on this weekend's attack. The Geçimli Outpost, is not one of the newer ones and is located in a river bed. By attacking the two other outposts, terrorists were aiming to distract security forces. When they crossed the bridge to help with the Geçimli attack, the PKK planned to blow up the bridge. In addition, terrorists also set up a series of handmade explosives intended for reinforcement troops.