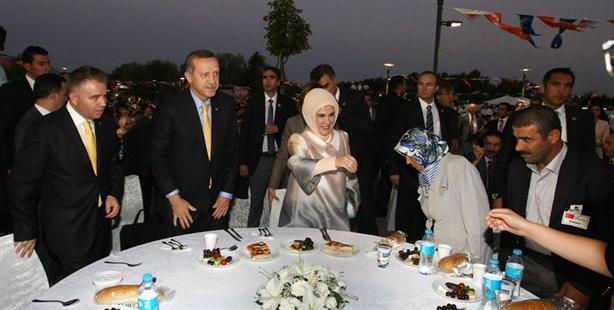 Prime Minister Tayyip Erdoğan lashed out on neighboring Iran in response to comments made by Iranian Chief of Staff Firouzabadi blaming Turkey for the bloodshed in Syria.

Erdoğan was speaking at an ifter held by the AK Party's Ankara headquarters when he referred to the statements released by Iranian Chief of the General Staff Seyed Hassan Firouzabadi on Monday warning Turkey that "it will be its turn" if it continues to "help advance the warmongering policies of the United States in Syria," "as worrying and regrettable". Erdoğan went on to state, "During a time when no one else in the world was by its side, Turkey was the country that stood by Iran."

Erdoğan relayed the following messages during his address:

IS ASSAD MUSLIM:" How can we consider an administration such as this to be Muslim? Knowing that they have lost the battle, the Assad regime is increasing the dose of violence in an attempt to try every means possible to leave a monument of blood behind them. There is no longer any way out remaining for Assad. How could there be a future for a country whose own appointed prime minister has deserted for Jordan?"

HARSH WARNING TO IRAN: "Unfortunately, the statement made by Iran's chief of general staff on a website belonging to the Revolutionary Guards that Turkey, Saudi Arabia and Qatar are responsible for the bloody developments in Syria is both worrying and regrettable. During a time when no one else in the world was by its side, Turkey was the country that stood by Iran. Turkey was also the country that defended Iran's right to nuclear energy."

THEY NEED TO TAKE A LOOK AT THEMSELVES: "But in Syria, once again I ask the Iranians, does defending a regime that kills its brothers suit our values and our beliefs? Before you try to call on someone else, you should take a look at yourselves. From the very start, we have remained cold-blooded, patient and composed when following the developments in Syria. We didn't succumb to the games and provocation.

IN REACTION TO THE CHP CHAIR

IN SYRIA IT'S THE BAATH PARTY, IN TURKEY IT'S CHP: "I wonder how long Kılıçdaroğlu has been working for Assad? In Syria it is the Baath party, in Turkey, it's the People's Party. You will see that certain circles in the U.S. and Israel will use joint expressions to say the same thing and make the same arguments as the opposition party."

HAVE YOU EVER LOOKED IN THE MIRROR: "Erdoğan also mentioned recent criticism made by CHP chairman Kemal Kılıçdaroğlu of "his own foreign affairs minister." On August 3rd, Kılıçdaroğlu stated "I have never seen such a helpless foreign minister in the history of the republic." Calling the comment lowbred and rude, Erdoğan lashed out at the CHP leader by stating, "Mr. Kılıçdaroğlu have you looked in a mirror? What have you ever done? Tell us and let's see. Just wait, yesterday was one, and today this is two."

NO ONE SHOULD TELL US "BOTH SIDES SHOULD DROP THEIR WEAPONS"


"The recent attacks staged during the month of Ramadan shows that the terrorist organization holds nothing holy and has absolutely no respect for any national or moral values. They have clearly shown that they share absolutely no common ground with the values of this land and this nation.

The terrorist organization has exhibited what sort of mentality they are perpetuating by practically sending terrorists to their own suicide, all the while knowing that they will not win nor achieve anything.

Nobody should tell us that "both sides should drop their weapons." The ones that need to relinquish their weapons are the terrorists.

I am calling on all of the media: If you are carrying accountability and responsibility for the 75 million in our beautiful country, then stop conducting propaganda for the separatist terrorist organization.