With a five lira donation you can feed someone from Arakan 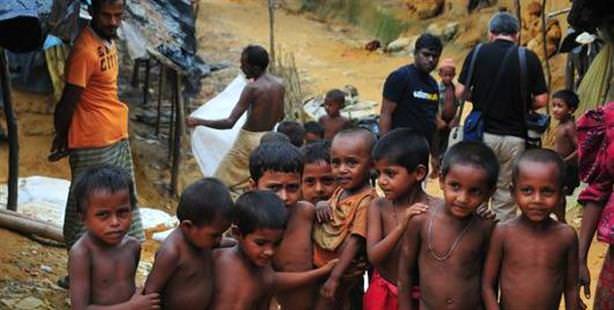 Entitled "Arakan Orphans are in the Care of Muslims, Come on Turkey Stake a Claim for What You Have Been Entrusted," the major campaign is being run by the Turkish Red Crescent and Çalık Holding in order to collect support for the Arakan Muslims who have been forced to flee their country of Myanmar due to being targeted in attacks.

Speaking at a press conference held at the Red Crescent's Logistics Center in Istanbul, Turkish Red Crescent President Ahmet Lütfi Akar explained that the people from Arakan are having to live their lives in inhumane conditions, and stated: "They have abandoned their homes, their money and their jobs and are simply trying to save their lives, integrity and honor. Unfortunately, the Bangladeshi state does not have the capacity to provide shelter or feed these people. We have two objectives. The first is to provide aid for those in need in Myanmar. They need tents, tarps, food, clothes, basically every kind of necessity. The second objective is to help those staying in and around the camps in the Bangladeshi border with Myanmar alongside the Bangladesh Red Crescent."

Emphasizing that one of the differences of this campaign is that it is a collaboration between the Turkish Red Crescent and Çalık Holding, Akar, "We have worked together during a number of natural disasters such as the floods in Pakistan, the earthquake in Van and in Somalia. As a sponsor, Çalık Holding allowed the Turkish Red Crescent to take the first step. They are contributing with both their press organs as well as by providing a significant amount of financial donations. We are very pleased to have this sort of 'solution collaboration'. This collaboration with Çalık Holding will continue and I want to point out that this is extremely significant as it is the first time a campaign has been initiated as a 'solution collaboration' with a holding."


Stating that donations for Myanmar will be accepted by all of the Turkish Red Crescent's bank accounts, Akar said: "Donations of five TL can be made by sending an empty SMS message to 2868 on all operators. Our 168 call line will be ready to take donations 24 hours a day. We have designated a one million dollar share from our own resources. Our public wants to make donations, however it is impossible for us to send aid from here. What we buy here for five liras costs 25 liras to get it there. We will be obtaining their needs there. For example, rice there is half the price. It costs four dollars to dress someone. No one should think, "I can only give a little, what will they be able to do with it anyways." When someone donates five liras, they will have either fed or clothed a refugee from Myanmar."