“It is our right to expect respect from Iran” 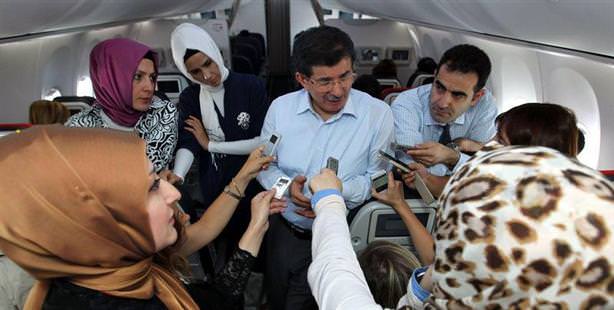 “First you go and support an administration responsible for killing tens of thousands. Then you turn around and criticize Turkey. This has absolutely nothing to do with honesty,” states Foreign Affairs Minister Davutoğlu.

While en route to Myanmar, Foreign Affairs Minister Ahmet Davutoğlu responded to journalists' questions on Iran and Syria and stated, "We may have differing opinions with Iran when it comes to Syria, however we have never closed down the channels with Iran."

On statements made by the Iranian Chief of Staff...

"There was always mutual respect between Turkey-Iran relations. Even at our most trying times. During the signing of the Tehran Agreement, or when we used our veto in the UN Security Council, we exerted efforts to ensure our rooted relations with Iran would help us surpass the crises. We are making the same efforts in regards to the nuclear issue. It is our right to expect respect and to see the value placed on Turkey in statements released by officials of a country we have intense and historical relations with. What upset us about the remarks made was the attempt to blame Turkey for what is happening in Syria. We may have different opinions when it comes to Syria; however we have never closed off the channels with Iran. First you go and support an administration responsible for killing tens of thousands. Then you turn around and criticize Turkey. This has nothing to do with sincerity or honesty."

As for the Iranian pilgrims kidnapped in Syria…

"That is a humane issue. We always separate humane issues. We have contributed before to the release of dozens of Iranians."

Have you seen any stance in Iran geared towards the division of Syria based on sects?

"The division of Syria would not be to anyone's benefit."

Did Salehi say this as well?

"Of course, of course… We never perceived the issue in Syria as being sectarian based. We have done everything we can to ensure it doesn't turn into a sectarian conflict."

Are the developments in the northern part of Syria unexpected?

"Alongside the factors of the Syrian regime's oppression of its own people, the PKK/PYD is acting opportunistic in trying to take advantage of the chaos. If Assad had stayed, they would have benefitted from collaborating and if Assad goes then they will use the lapse in authority to their advantage."

"They will not be able to succeed, because first and foremost the Syrian public sees all of this. The Syrian Turkmen and Kurds also see what is happening."

'We need to always be ready for everything'

"Over the next ten years in both Syria and in the Middle East, there is a tableau in which any sort of unexpected development could arise. We need to be prepared for this. This region is not a bed of roses. We must always be ready for anything. The opposition says, "Let whatever transpires there happen on its own, then Turkey can speak out about it later." However, that is not going to happen. This is a dynamic period. It took eight to ten years in the Balkans. It could last that long here as well. We can foresee the risks. We foresaw the situation in Myanmar. This is a government that six months ago sent an ambassador to the region. How could we not foresee the developments in Syria?"

This is a translation of an article originally written by Sevilay Yükselir.