PKK explodes bus in a touristic resort town in Izmir 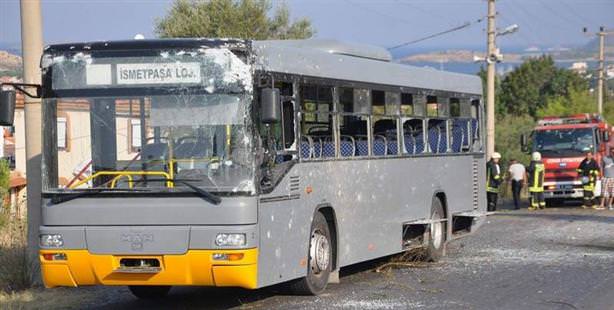 Terrorists ambushed a Turkish military bus on its way to a naval base in the western province of Izmir on Thursday in an attack which police said killed one soldier and wounded at least 11 people.

PKK terrorists detonated explosives on the road before opening fire on the vehicle at around 8 am near Foça, a small resort town on the Aegean coast where there is a naval base. The soldiers in the bus returned fire.
Terrorist attacks on military vehicles are common in south-east Turkey, but are rare in the west of the country.


Television images showed the bus with its windows blown out and glass strewn across the road, and investigators in white overalls searching the scene.

Wounded soldiers were taken to a nearby hospital for treatment, a police spokeswoman said. It was unclear if the 11 injured people included any civilians.

The attack came at a time of intensified clashes between the army and the PKK. With fighting centered close to the Syrian border, Turkish officials believe Syrian President Bashar al-Assad is arming PKK rebels, following a sharp deterioration of ties between the two countries since the start of the Syrian uprising 17 months ago.

Prime Minister Tayyip Erdoğan has been one of Assad's most vocal critics.

"Assad gave them weapons support. Yes - this is not a fantasy. It is true. We have taken necessary measures against this threat."

Turkish armed forces have clashed with PKK fighters around the region of Semdinli, close to the borders with Iraq and Syria, since late July.

Erdoğan said 115 PKK militants had been killed in the fighting there so far.