A helping hand of brotherhood for Myanmar 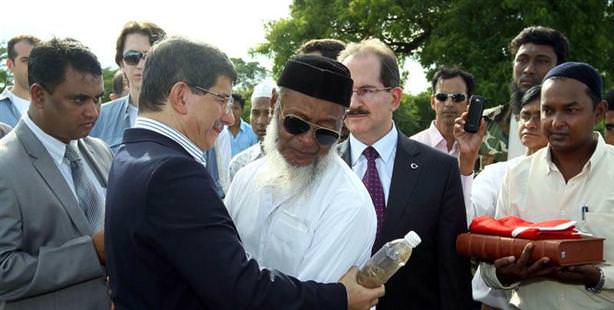 The Turkish delegation which is in Myanmar to bring humanitarian aid to the persecuted Muslims in Arakan (Rakhine) also includes a number of parliamentary deputies, bureaucrats, aid organization representatives and journalists.

Foreign Affairs Minister Davutoğlu first met with his Myanmar counterpart Wunna Maung Lwin. Later, Myanmar President Thein Sein hosted Davutoğlu in the President Palace. During the meeting, Sein expressed how pleased he was that Turkey has opened an embassy in Myanmar. The Myanmar President also said that they would be opening an embassy in Ankara themselves as soon as possible which would further develop mutual relations.

While en route to Myanmar, Foreign Affairs Minister Davutoğlu answered journalist's questions aboard the plane. Commenting that the Myanmar regime is slowly opening up to the world, Davutoğlu explained that it was this observation that drew them to open an embassy in the country. Davutoğlu also pointed out that the Rohingya Muslims, which reside in the Arakan region, have suffered neglect for a long time now. "We want to open up to Myanmar as well as have access to Arakan. These are the two objectives we want to fulfill simultaneously. In fact, their acceptance of our arrival is a reflection of Turkey's influence in the international realm. They have not done this for any other country. Our ambassador worked very well."

A VISIT TO TURKISH MARTYRS CEMETERY

Davutoğlu explained that he had given two instructions to the ambassador appointed to Myanmar, one of which was to find the graveyards of the 1,500 Turkish soldiers who were taken to Myanmar from Çanakkale and Egypt during World War One, where they were later killed. Davutoğlu went on to state: "The British took their Turkish prisoners to Myanmar to have them work. They poorly treated a number of them and most of them died and were buried there. Our Ambassador has located the bodies, 700 of which are in one location and 300 of which are in another. Six or seven more locations have also been found. I had suggested certain locations, because I did a lot of research. I have been following this issue very closely, because we are greatly indebted to these soldiers." Explaining plans to build a cemetery for these martyrs, Davutoğlu said that they would be using the funds brought in from paid military service to build the memorial. Minister Davutoğlu and his wife Sare Davutoğlu placed a wreath on the Turkish cemetery in Mektila and laid roses on the soldiers' graves.

Davutoğlu went on to state, "We are witnessing a reunion here today, during this historical meeting. We are in the presence today of our ancestors, who were collected from a number of fronts during WWI, from Palestine, Egypt, Iraq, Syria as well as others and were brought to Basra as prisoners. From Basra they were taken to Karachi by ship. From Karachi they headed to Calcutta by train and from Calcutta they arrived in Yangon. From Yangon, they were brought here to prisoner camps." Davutoğlu stated that most of the approximately 12,000 Turkish soldiers that were brought to Myanmar died before they ever had the opportunity to return to their homeland and explained that they received archives and documents sent to Turkey by Major Dr. Necip Bey and a number of other officers.

A LETTER TO MAKE A MOTHER WEEP

Most of the soldiers kept in Myanmar would write letters to their families, which were first sent to England and then brought to Turkey once the Red Cross handed them over to the Red Crescent, explains Davutoğlu, who said most of these letters were left unresponded to.

Davutoğlu offered the example of one soldier's letter which recalls that over the past three years since he had been held captive he had written numerous letters to his family and had yet to receive a response. The soldiers asks how his family could not write to him for the past three years he had been held prisoner and recalls how his comrades receive letters from their parents, however he is left waiting for a letter to arrive and pleads to his mother to write him a letter.

AN ANSWER FOR AN UNANSWERED LETTER

Most likely, the soldier's letters were never delivered to his mother, explains Davutoğlu, who says otherwise she would have most likely responded. Davutoğlu went on to state: "We are now here to respond to these letters. We are saying that we are here to bring 75 million responses to the letters of our beloved and honorable martyrs. Know that you have never been secluded from our hearts and our minds. We are here to pour water brought from Anatolia on your graves. We have also brought you prayers from the Anatolia you left behind. We will also be taking soil from your graves here to your land in Çanakkale. You have not been abandoned, nor are you secluded from us."

HELP IS RAINING IN

Turkey's extension of a helping hand for the Muslims from Myanmar's Arakan region is growing like an avalanche. The aid campaign spearheaded by the Prime Ministry Emergency and Natural Disaster Presidency (AFAD) has collected 2,184,898 liras thus far.

The Adana Governorship has begun an aid campaign for the Muslims in Myanmar's Arakan.

The İnegöl Municipality has also begun an aid campaign.

AK Party group members from the Manisa District General Assembly devoted their alms for the holy month of Ramadan to the Arakanese Muslims through the campaign run by the Directorate of Religious Affairs.

In Van's Erciş district, members of Eğitim Bir-Sen donated 1,500 TL, which had been set aside for an iftar.

Mevlit Kızılay, the Director of the "Kimse Yok Mu" Foundation's Sakarya Branch has called on citizens to donate their charity and alms for Ramadan to the Muslims in Arakan.

Davutoğlu went on to state that up until now the Myanmar state has only ever allowed the United Nations access to the region. Turkey is therefore the first to be allowed with the exception of the U.N. Mentioning that the problem has been ongoing for a decade now; Davutoğlu stated that they predict the death toll in Arakan to be in the thousands. Explaining that they will be distributing the aid they brought with them to both the Buddhist and Muslim camps, Davutoğlu said, "Our first objective here is to establish good relations with the Myanmar administration and to reach aid to Arakan."