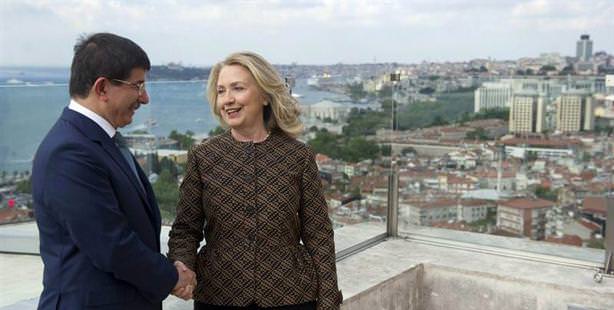 The United States and Turkey will expand operational planning for Syria, U.S. Secretary of State Hillary Clinton said on Saturday after meeting Turkey's foreign minister, with both indicating no fly zones could be a possible option.


Speaking to reporters in Istanbul in a joint press conference with Ahmet Davutoglu, U.S. Secretary of State Hillary Clinton stated, 'Our primary priority in Syria is to support the opposition's efforts, to halt the violence and for Syria to establish a democracy without Assad. The United States will continue to support the opposition, with the exception of arms, by offering financial and communication support. We are also continuing our assistance in a variety of manners," stated Clinton.

"We have been closely coordinating over the course of this conflict. But now we need to get into the real details of such operational planning and it needs to be across both of our governments. Our intelligence services, our military have very important responsibilities and roles to play so we are going to be setting up a working group to do exactly that," she added.

Turkish Foreign Minister Ahmet Davutoğlu stated, ''Our main wish is for decisive steps to be taken to put an end to the ongoing tragedy of humanity in Syria. We are all extremely concerned about the most recently developments in Aleppo. For the air forces to attack settlements in Aleppo not only leads the way to a significant massacre, but it is also a massacre of history. The international community now needs to take steps that clearly stated 'stop' to this massacre."

According to high-level officials accompanying U.S. Secretary of State Hillary Clinton on a tour of nine African nations; "New sanctions will soon be enforced aimed at expediting the demise of the Assad regime."

The officials, who refrained from revealing their identities, state that these new sanctions will be in addition to those previously issued and target those close to Assad, such as cabinet members and Iranian establishments.

Clinton is in Istanbul

U.S Secretary of State Hillary Clinton arrived to Istanbul by private plane at 04:30.


Upon her arrival to Atatürk Airport, Clinton was greeted by Istanbul Governor Hüseyin Avni Mutlu as well as others. Intense security measures were enforced during Clinton's arrival. The U.S.Secretary of Stat ewill be hosted by both President Abdullah Gül at the Tarabya Palace and Prime Minister Recep Tayyip Erdoğan at the Prime Ministry's Istanbul Office.

'Syria' to be main agenda

Clinton is expected to focus on establishing a "common operational picture" with Turkish officials and Syrian opposition members, to serve as a guideline for the democratic transition to follow Assad.
During her stay, Clinton is also expected to announce an additional aid package of 5.5 million dollars for the tens of thousands of Syrians forced to seek shelter in neighboring Turkey.

Pointing out that the situation is only worsening in Syria and the opposition forces are gaining power, officials says Clinton will attempt to ascertain Turkey's stance following the most recent developments.