“The situation in Arakan is even worse” 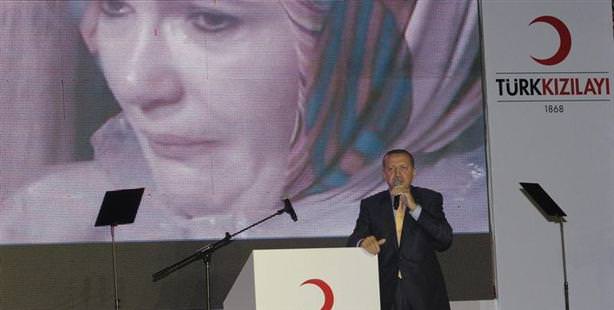 Attending a Turkish Red Crescent iftar dinner, Prime Minister Erdoğan remarked on the situation in Myanmar by stating, "In telephone conversations, I was told that the situation there is much worse than it was in Somalia.”

Prime Minister Recep Tayyip Erdoğan attended an iftar dinner held in honor of the 144th anniversary of the founding of the Turkish Red Crescent, where he delivered medals to 170 contributors to the organization. The event was held at the Haliç Congress Center on Friday, where Erdoğan was joined by EU Minister and Chief Negotiator Egemen Bağış, Istanbul Governor Hüseyin Avni Mutlu, Red Crescent President Ahmet Lütfi Akar, Prof. Dr. Ahmet Mete Işıkara, Acun Ilıcalı, Hülya Avşar and a number of other invitees.

During his address, Prime Minister Erdoğan praised the Red Crescent on their efforts and stated, "We have felt a sense of pride, honor and excitement on its own to see the Turkish Red Crescent flag wave next to our 'Star and Crescent' in a number of countries we have visited."

In regards to Myanmar, Erdoğan stated the following: "On Wednesday, our Foreign Affairs Minister, my wife and my daughter, Turkish Red Crescent teams, the Turkish International Cooperation and Development Agency (TİKA) and a number of representatives from civil society organizations went to Myanmar where they held a series of meetings. This was our first diplomatic visit. Our intentions in going there will absolutely in no way contain any form of racial or religious discrimination. In telephone conversations, I was told that the situation there is much worse than it was in Somalia. However, what upsets me is this: Certain media members are asking what business our Foreign Minister has being there. They say, you are taking this step in a country you have not held diplomatic relations with up until now, therefore what does the foreign minister have to do with it. If you can believe, if the 780 square kilometer land that makes up this nation was in their hands, they wouldn't even want that to be lived on. There is this sort of mentality," stated Erdoğan.

This is a translation of an article originally written by Hasan Ay and Cevdet Özdemir.