A joint stance against terrorism 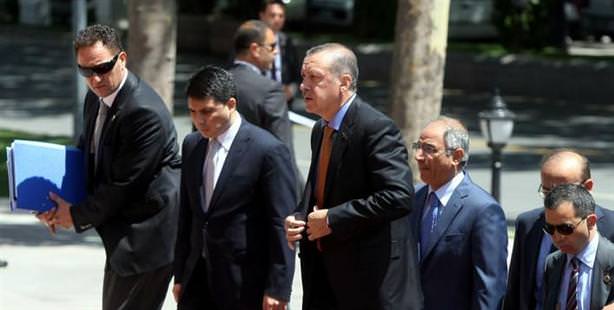 The kidnapping of CHP Deputy Hüseyin Aygün by the PKK terrorist organization has encouraged all parties to speak out against terrorism. Prime Minister Erdoğan, who met with fellow party members, condemned the incident while CHP stated, “This reckless attack will reinforce our determination in the fight against terrorism,” and BDP ordered, “Aygün should be released immediately.”

The PKK terrorist organization's kidnapping of Republican People's Party, or CHP, Deputy Hüseyin Aygün in his constituency of Tunceli has made its mark on the nation's political agenda. The echelon of the state and the nation's political parties have banded together in a joint stance against terrorism. CHP has gone on alarm since Aygün was abducted. CHP leader Kemal Kılıçdaroğlu called an extraordinary meeting of the Central Executive Board.

A summit held at the Prime Ministry and attended by Prime Minister Erdoğan, Deputy Prime Ministers Beşir Atalay and Bekir Bozdağ, Minister of Justice Sadullah Ergin, Minister of Interior Affairs İdris Naim Şahin and National Intelligence Organization (MİT) Undersecretary Hakan Fidan, dealt with the state's new strategy against the PKK terrorist organization and the abduction of CHP deputy Aygün. The kidnapping was also brought up at the Council of Ministers. The government is also maintaining close contact with Aygün's family and relaying updates as they develop.

Speaker of the Parliament Cemil Çiçek referred to Aygün's abduction as "a disrespect to democracy and the assembly," and went on to state, "Of course it's upsetting and it makes you think. At the same time, it is something that needs to be condemned. I condemn this. This is disrespectful of the public will, democracy and our Assembly. We are continuing to work on this. We need to see the details. Why Tunceli, why Mr. Aygün, why is such a disrespectful act being conducted against one of our members of parliament? Once the details have been made clear, I will provide a more thorough assessment."

MHP Chairman Devlet Bahçeli also sent Kılıçdaroğlu a telegraph in which he condemned the incident and expressed his deep sadness.

A HARSH RESPONSE FROM BDP

BDP Chairman Selahattin Demirtaş announced, "We are saddened to have learned that Mr. Hüseyin Aygün was forcibly abducted by an armed group. As a party, we are prepared to present all forms of humane assistance in order to ensure Mr. Aygün's freedom and safe return. First and foremost, we find this sort of event to be unacceptable, and do not approve. We are expecting Mr. Aygün to be released immediately before any more time has passed."

INFORMATION RECEIVED THAT HE MAY BE 'RELEASED'

As soon as he heard wind of the abduction, CHP Chairman Kemal Kılıçdaroğlu held a meeting with fellow party members that went into the early morning hours and later he sent a delegation of five deputies to Tunceli. The committee spent the entire day speaking with people in the region, including visiting the governorship and police department. Kılıçdaroğlu's advisor Ali Kılıç, who also hails from Tunceli, joined the community in Tunceli, where he announced that he has heard word that Aygün may soon be released. CHP Spokesman Haluk Koç however stated after meeting with the Tunceli governor, that this information has yet to be confirmed.

MINISTER OF ENERGY AND NATURAL RESOURCES TANER YILDIZ: I see this as a step being taken against Turkey's political stability.

ASSEMBLY HUMAN RIGHTS COMMISSION CHAIR AYHAN SEFER ÜSTÜN: This is an unacceptable act of terrorism. Hüseyin Aygün's abduction is a clear human rights violation. This is also a significant event in terms of exhibiting what the separatist terrorist organization wants to do in our country. We strongly condemn it.

CHP DEPUTY CHAIR SEZGİN TANRIKULU: This is an unacceptable event. This does not simply involve Hüseyin Aygün personally, but it is also an attack staged against the parliamentary system.

MHP GROUP DEPUTY CHAIRMAN: It is saddening and concerning. We need to show that despite all of this, the PKK terrorist organization will not be able to take the Turkish public's hegemony hostage.