Leaders of the Islamic world gather in Mecca 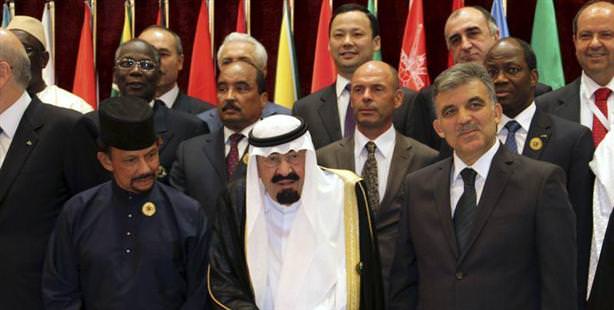 The Fourth Leaders Summit of the Organization of Islamic Cooperation (OIC) has convened in Mecca.

Saudi Arabian King Abdullah hosted the summit which was held in the Al Safa Palace located near the Kaaba in Mecca. President Abdullah Gül attended the summit for Turkey and was joined by a number of kings, state leaders, prime ministers, foreign ministers and high-level representatives from the 57 member-nation organization. Intense security measures were in place for the start of the summit, a two-day meeting marking the fourth extraordinary leader summit for the Jeddah-based OIC.

State leaders and guests were met upon entry by Saudi Arabia Crown Prince and Minister of Defense Salman Bin Abdulaziz and later greeted by King Abdullah. In an apparent conciliatory gesture King Abdullah welcomed leaders to the summit with Iran's President Mahmoud Ahmadinejad at his side. With Ahmadinejad to his left, King Abdullah had leaders from the Gulf nations seated to his right. All state leaders were gifted a mid-sized rosette which they pinned on their left collars as they entered the Safa Palace. Also attending the summit were the kings of Bahrain and Jordan and the Presidents of Egypt, Yemen, Pakistan, Tunisia, Nigeria, Chad, Afghanistan, Somalia, Gabon, Sudan, Bangladesh and Uganda. There was also the Prime Minister of Malaysia and a number of nations' foreign ministers participating in the summit.

President Abdullah Gül arrived to the ceremony scheduled for 23:00 at around 23:20. Gül was greeted by Prince Salman and they shared a warm chat. From there, Gül went on to shake hands with King Abdullah followed by Iranian President Mahmud Ahmadinejad and also greeted Gulf nation leaders. Later, a group photograph was taken of the attendees. After the welcoming ceremony, which lasted approximately 30 minutes, the summit commenced with an opening speech by King Abdullah. OIC General Secretary Ekmeleddin İhsanoğlu followed with a short address.

The two-day summit intends to discuss issues faced by the Islamic world, including the inhumanity currently suffered in Syria, Palestine, Myanmar, Sudan and Mali. On Wednesday, the second day of the summit, leaders of Muslim countries are expected to suspend Syria's membership of the Organization of Islamic Cooperation, despite the vocal objections of President Bashar al-Assad's main ally Iran. The decision by the 57-member organization, which requires a two-thirds majority, will expose the divisions within the Islamic world over how to respond to civil war in a country that straddles the Middle East's main sectarian faultline.