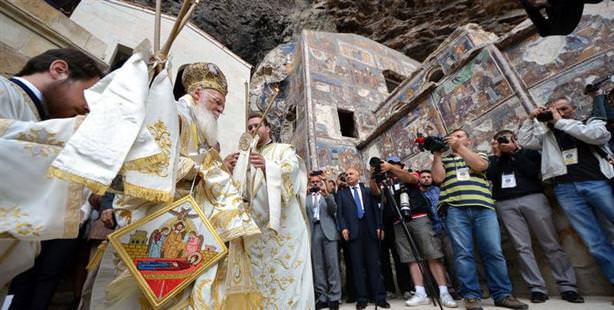 During the liturgy at this year’s mass at the Sümela Monastery in Trabzon, the Fener Greek Patriarch stated, “The situation in Myanmar is breaking all of our hearts. Murders are taking place in the name of religion.”

Founded in 386 AD, the Greek Orthodox Sümela Monastery is situated on a steep cliff in the Altındere valley, in Trabzon. After thriving for centuries, the Sümela Monastery was abandoned in 1923 due to population exchanges between Greeks and Turks. In 2010, 88 years after it was last active, the monastery was once again opened to masses, and this year marked the third of its kind, held on August 15th, the day of the Dormition of the Theotokos. Almost 4,000 people flocked to the monastery for the first mass held in 2010 after decades of dormancy. This year, the numbers were more modest as 200 faithful came to Trabzon to take part in the Divine Liturgy. The economic crisis in Greece is considered to have been influential in the severe drop in numbers of worshippers visiting the historical monastery for its annual mass.

Intense security measures were in play starting in the morning hours as Orthodox Christians from Russia, Georgia and Greece lit candles in honor of the day they believe Mary ascended. The Fener Greek Patriarch was accompanied by a kemencha player as he climbed the path leading to the monastery. Bartholomew later presented the musician with a gift. The mass began at 10:00 Wednesday morning and was led by Patriarch Bartholomew. Amongst those that came out to watch the mss, was Greece's Ambassador to Istanbul Nicolas Matthioudakis and Maçka Mayor Ertuğrul Genç.

Emphasizing that everyone has the right to freely fulfill their religion obligations, Bartholomew stated, "Instead of providing this liberty, do states and communities have the right to attack, strike or kill someone? Doesn't everyone's heart ache to see our Prime Minister's wife, Mrs. Emine Erdoğan personally pay a visit to Myanmar to witness the oppression? Unfortunately, the murders, slaughter and banishment committed in the name of religion continues. We have not yet been saved from this travesty."

Bartholomew also commented on the news that the historical Hagia Sophia Museum in Trabzon may be opened as a mosque to hold prayers ceremonies, by stating, "There is no need. It should remain as a museum." The Patriarch concluded his address by celebrating the Muslim Ramadan holiday.

The Prime Ministry Emergency and Natural Disaster Presidency (AFAD) has announced that as of today, they have collected 33,751,443 TL in aid for Myanmar. Meanwhile, the United Nations has announced that the Turkish delegation's trip to Myanmar last week was of extreme importance. UN Secretary-General Ban Ki-moon's Special Advisor on Myanmar Vijay Nambiar was commenting on the recent trip paid by Foreign Minister Ahmet Davutoğlu, his wife and Prime Minister Recep Tayyip Erdoğan's wife Emine Erdoğan, when he stated, "This is one of the first times the Myanmar government has ever accepted international aid from any source that is not the U.N." Nambiar went on to state that these sorts of positive steps contribute to Myanmar's ongoing democraticization and reform process.

This is a translation of an article originally written by Özgür Özdemir.