'BDP is a product of societal fears’ 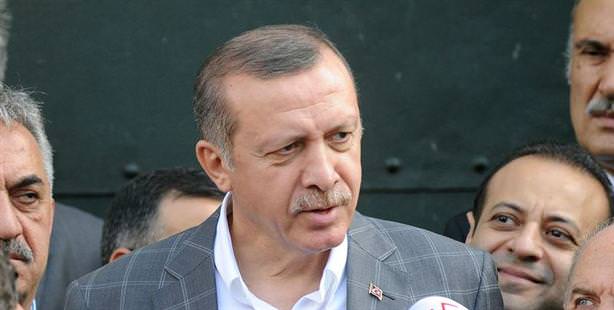 Commenting that if the people in the Southeast were not so afraid of the PKK terrorist organization, then the BDP, or Peace and Democracy Party, would not get the vote, Erdoğan states "These deputies embrace them (terrorists) as if they were brothers, so of course we suffice to ask, ‘what sort of relationship is this’?

Prime Minister Recep Tayyip Erdoğan was remarking on imagery surfaced depicting BDP deputies embracing terrorists, when he stated, "The fear established by the separatist terrorist organization in the public has now found its way to the parliament. As you can see, deputies embrace members of the terrorist organization as if they were brothers. That is how deep their relationship is." Mentioning the fact that the recently kidnapped CHP Deputy referred to his abductors as "friends and kids", Erdoğan asks, "What sort of game is this? What are they trying to do? We haven't been saying that the CHP and BDP are the same for nothing."

Prime Minister Recep Tayyip Erdoğan ushered in the holiday in Istanbul, where he attended the tradition Bayram prayer ceremony at the Süleymaniye Mosque. Erdoğan was joined by Minister of Customs and Trade Hayati Yazıcı and EU Minister Egemen Bağış. Erdoğan greeted everyone inside the mosque, personally offering each and every one holiday wishes and then answered questions from the press upon his departure. Erdoğan sent his best wishes to all of Turkey's citizens for the holiday and emphasized the importance of unity and solidaritybefore going on to deliver the following messages:

'WHAT SORT OF RELATIONSHIP IS THIS?'


"Holidays are days in which solidarity and sharing must be at its peak. However, as we experience this at the same time in our country there are soldiers we have lost to terrorism. I believe that they are the cornerstones of our beautiful country. While offering their family my condolences, I also want to say that we will be relentlessly continuing this fight against terrorism, which we will pursue without backing down until the end.

(On images depicting BDP deputies closely engaged with PKK members who had blocked off a road) This situation needs to be depicted in both the printed press and in visual media in a different manner. Because this is a different scenario being played out in Turkey. We have addressed the BDP a number of times in parliament asking them why they have not announced that the PKK is a terrorist organization.

They haven't made such an announcement because the separatist terrorist organization is the very reason behind how they got into parliament to begin with. The fear established in the public by the separatist terrorism organization has now made its way to the parliament. If my Kurdish brothers in the Southeast were not living under such fear, then the BDP would not have received the votes it did.

However, as you can see, deputies embrace them as if they are brothers. They refer to them as that as well. There are records of all of this. The media has already determined this to be true. So, what is it that befalls us? To ask, 'what sort of relationship is this'? Their relationship is this deep?

(Regarding the kidnapped CHP Tunceli Deputy Hüseyin Aygün) If we look at situations in the past, other deputies were also unable to say it was terrorists that had abducted them. They also used the terms 'friends, brothers'. So what sort of scenario is this? What game is being played? What do they want to happen? We now need to ponder over this as a nation. We need to figure out who is friends with who. We don't say that the CHP and the BDP are the same for nothing. They are the same. One is just a different version of the other. It's as simple as that."

.
This is a translation of an article originally written by Mesut Er.