BDP embraces PKK members who have murders under their belt 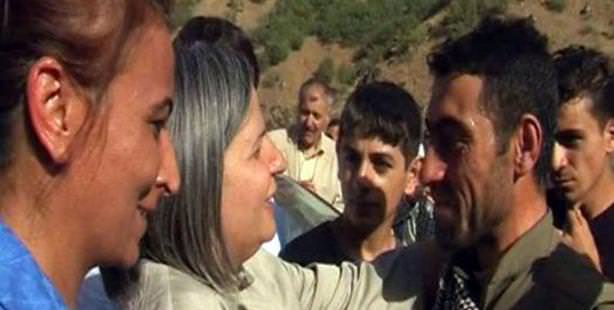 It turns out the PKK member BDP Co-Chair Kışanak was recently pictured embracing, was none other than a terrorist who goes by the code name 'Ciğer-Brindar' who participated in staging the attack on the Yeşiltaş Outpost, resulting in the deaths of eight soldiers.

BDP, or Peace and Democracy Party, Co-Chair Gülten Kışanak chose to embrace PKK terrorists who had blocked off the road on the eve of the Ramadan Bayram. Images show Kışanak hugging a terrorist who uses the code name 'Ciğer- Brindar' and was actively involved in a terrorist attack on the Yeşiltaş Outpost which resulted in the deaths of eight soldiers. The other two terrorists the BDP delegation was pictured embracing go by the code names 'Sorej' and 'Erdal'.

The controversial incident took place on Saturday, when a number of BDP deputies were stopped by a group of four PKK terrorists, one of which was a woman at the entrance to Güzelkaya, Şemdinli. The terrorists proceeded to stage propaganda for half an hour and then hugged BDP Co-Chair Kışanak as they bid farewell. The gendarmerie, which has since looked into the footage captured of the warm greeting, has been able to decipher the identities of the terrorists. According to the information obtained, the terrorist Kışanak embraced goes by the code name 'Ciğer- Brindar'. The terrorist is supposedly in charge of the Gülkan Squad while under command of the Herki Troop which is active in the Aktütün and Geli Rvier regions. The approximately 40-member troop is run by a PKK terrorist who uses the code name Gabar Hestune and is under the direct command of 'Perver Siirt' who is in charge of the PKK's Cilo State wing. At the head of all of these members is Mehmet Can Gürhan who goes by the name 'Reşit Dostum' and was a part of the Yeşiltaş Outpost raid in which eight soldiers were killed and 32 terrorists rendered ineffective.
The gendarmerie's findings also revealed that two of the terrorists seen with the BDP deputies go by the names 'Sorej' and 'Erdal'. During the exchange, the terrorist who uses the code name 'Sorej' took photographs of the deputies. A high-level official, who spoke to SABAH regarding the greeting between BDP and the terrorist organization, which is being highly debated amongst the public, says, "This meeting was not a coincidence."

This is a translation of an article originally written by Ertuğrul Erbaş.