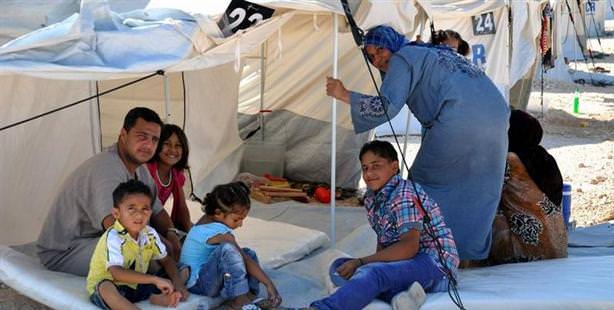 The Disaster and Emergency Management Presidency of Turkey (AFAD) has announced that as of yesterday, the number of Syrian refugees that are currently in Turkey seeking shelter is 78,409.

This in effect means that the number of Syria refugees in Turkey is nearing the 100,000 figure, which is considered to be the point that when reached will necessitate the setting up of a buffer zone

AFAD released a written announcement yesterday reminding that at present, Turkey has set up a total of eight refugee camps; five in Hatay, two in Şanlıurfa and one in Gaziantep and a 12,000 person capacity container 'town' in Kilis. AFAD stated that due to the internal strife in Syria, for over a year now Turkey has provided all forms of humanitarian aid to over 110,000 Syrian refugees that have entered Turkey and at present in addition to the camps, refugee have also been set up in boarding schools, dormitories and sports centers located in Kilis, Gaziantep, Kahramanmaraş, Adana, Adıyaman and Osmaniye.

The announcement emphasized that at present, efforts are ongoing to establish additional tents in Gaziantep's Karkamış and Nizip, in the center of Kahramanmaraş and in Osmaniye Cevdediye for Syrian refugees.

The announcement went on to note; "Yesterday and today combined, a total 3,518 Syrian nations entered our country, while 113 returned by their own will. Up until now, a total 110,772 Syrians have entered Turkey. Out of that figure, 32,363 Syrian nationals have returned to their own country. As of today, there are 11,062 refugees in Hatay, 11,740 in Gaziantep (3,631 of which are staying in schools, dorms or gyms), 15,092 in Kilis (2,950 of which are in schools and dormitories) and 24,947 Syrian nationals are being housed in Şanlıurfa. There is also the additional figure of 6,589 Syrians in Kahramanmaraş, 3,129 in Adana, 951 in Adıyaman'da 951, 1,491 in Osmaniye and 2,936 in Malatya that are being temporarily housed in boarding schools. There are also a total 472 Syrians who are staying in hospitals at present, 414 of which are patients and 58 their companions. Including those in the hospital, the total number of Syrians who are currently being sheltered in Turkey is 78,409."