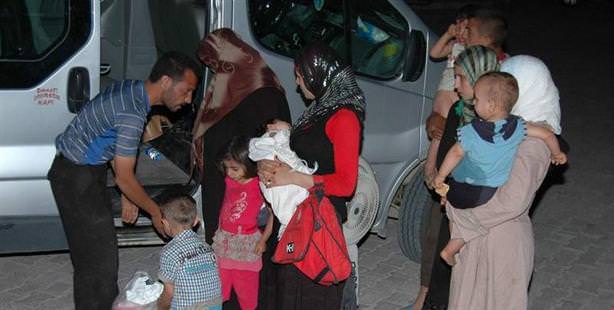 The influx of Syrian refugees to Gaziantep and Hatay has begun to affect the region’s real estate market. Rentals that used to go for 500 TL a month are now up to 1,500 TL. Their first choice: homes with a lot of rooms and heating systems. Real estate agents in Hatay state, “We can’t seem to find enough rentals for Syrians. In addition, some landlords are trying to avoid renting to Syrians. In exchange they are requesting high deposits and rent up front.”

The war in Syria has now hit real estate prices in Gaziantep and Hatay. With rental prices soaring to double and triple previous amounts, local residents are supposedly having a tough time finding a place to rent. According to figures, the number of Syrian nationals that have settled into wealthy neighborhoods in Gaziantep has surpassed 5,000. At the same time, Hatay is also experiencing a boom in the number of prosperous Syrians that are settling in following the increasing violence in Aleppo. Wealthy Syrians appear to be finding ways to enter Turkey illegally, after which they are depositing funds in banks to purchase homes in the names of acquaintances in order to facilitate the home-buying process. These Syrians are settling into prestigious neighborhoods in both cities in large numbers which is resulting in trepidation by locals and real estate agents, not only for their numbers but also their potential relations with the Syrian administration.

THEY ARE ALSO BUYING LUXURIOUS VEHICLES

Gaziantep is perhaps the city where the war in Syria is reflected the most. Due to the increase in the number of Syrian refugees, house for sale signs are now being put up in Arabic. In daily life, Syrians are visible everywhere, from shopping centers to hospitals, restaurants to hotels and have fast become real estate agents' most desirable customers.

While those of the low-income variety are being holed up in refugee camps set up along border towns, the more wealthy Syrians are renting homes that would previously go for 500-600 TL by paying 1,000- 1,500 TL in the city's most luxurious neighborhoods. These Syrians are not only buying homes in the names of their relatives, but they are also beginning to buy luxurious automobiles. When it comes to homes, they tend to be families of up to ten people and therefore prefer homes with ample rooms and central heating, and when it comes to cars, they are generally preferring the over 70,000 TL variety.

SOME ARE EVEN RENTING OUT THEIR OWN HOMES

Hatay is also a city where Syrians have begun to flock to. According to officials from the Antakya Real Estate Agents Association, the wealthier refugees prefer to stay in hotels or furnished homes, while those in the middle-income range prefer to rent. According to the officials from the association, it has become nearly impossible these days to find a rental home in the provincial center or the district of Reyhanlı. There is also talk that landlords in Hatay are apprehensive of Syrian renters. In order to combat this, they are requesting copies of renters' passports, which they are then showing to police.

Syrians, who are also choosing to rent and purchase property in the Yayladağı and Altınözü districts, have to return to Syria when their three month residence permits come to an end. They then later enter the country again, and spend another three months in Turkey. In Hatay, where rental prices used to range between 200-300 TL, prices have now tripled. One real estate agent explains that landlords tend to take a few months rent upfront while most request high deposits. The agent also explained that some people are leaving their own homes in order to put them up for rent.

According to Ali Genco, the owner of Genco Real Estate and the Vice-Chair to the Antakya Real Estate Commissioners Association is popular with Syrians because he speaks Arabic. According to Genco, they are unable to find enough homes for the demand brought in by Syrians and most refugees are choosing to buy homes in Adana and Mersin.

16 PEOPLE UNDER THE SAME ROOF

Yahyal Ahraz, a Syrian refugee who had to leave his home and workplace in Aleppo 40 days ago to enter Turkey, explains that he is now staying with his business partners Enver Abras and Yasir Abras in a house they rented in the center of Hatay. However, their minds are still with their business and homes they had to leave behind. "We are not considering returning until the conflict in our country is over, because there is no security of life. Every day the city is being bombed by war planes. We persevered a long time in order to not abandon our country. We thought it would come to an end, however when it continued to get worse each day, we decided to seek shelter in Turkey for the safety of our families," explains Ahraz. "Three families are staying together in the house we rented; we share the costs amongst us."

Senevat Abras, a mother of three who is staying in a rental in Antakya for 450 TL, explains, "We are four families staying together. We are trying to get used to Turkey. Our days are busy with housework. Including the kids, we are 16 people under the same roof. It's difficult but we have to endure."

This is a translation of an article originally written by Müjgan Halis and Yaser Çaparoğlu.