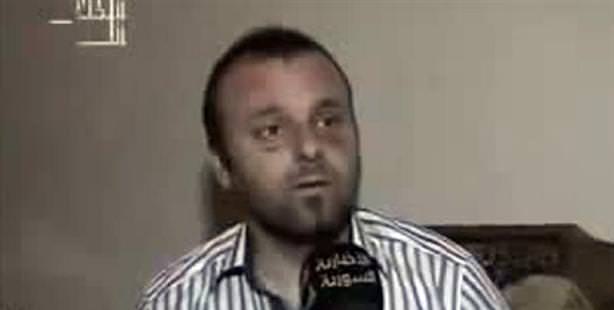 The first images since the abduction of Turkish cameraman Cüneyt Ünal in Syria were broadcasted on Monday on a channel affiliated with the Syrian government. Ünal had bruises which may have been a sign he had been tortured while he also seemed scared in his delivery.

Turkish cameraman Cüneyt Ünal was kidnapped in Aleppo on August 21st. On Monday, a Syrian state television station revealed the first footage seen of Ünal since that day.

Cüneyt Ünal, who works for Iraq's al-Hurra television station, appeared exhausted and was obviously reading aloud a prepared statement when he stated, "My name is Cüneyt Ünal. I flew from Istanbul to Hatay by plane. I then arrived to Kilis from Hatay by car. I crossed over from Kilis to the Azez Village with an armed group. Everyone in the group with me had a weapon. Within the armed group there were also groups of Chechens, Libyans, Qataris and Saudis. Based on the recording, those close to him and his colleagues believe the Turkish journalist has most likely endured some form of torture.

Cüneyt Ünal's wife Nuran Ünal pointed out that the experienced journalist, who has worked in a number of Arab nations, mispronounced the names of locations and appeared to be uneasy as evidence her husband was speaking under pressure. "These are just things he has been made to memorize. Cüneyt is just doing his job."Nuran Ünal went on to state, "At least from this footage I know that he is alive, so I feel a little better. I understood from my first impression of watching the video, that he was filmed under pressure. He also has bruises under his eyes, which means he has been subjected to violence, whereas Cüneyt couldn't even kill an aunt."

"Syria is responsible for this journalist's safety"

In an announcement released regarding the situation, Foreign Affairs Minister Ahmet Davutoğlu stated, "For the Syrian regime, anyone who raises their voice against the ongoing oppression are either terrorists, Israeli agents or something else. We are not taking any allegations that Ünal was in Syria for anything other than journalism seriously. After seeing this footage, the Syrian state is now responsible for the well-being of our cameraman."