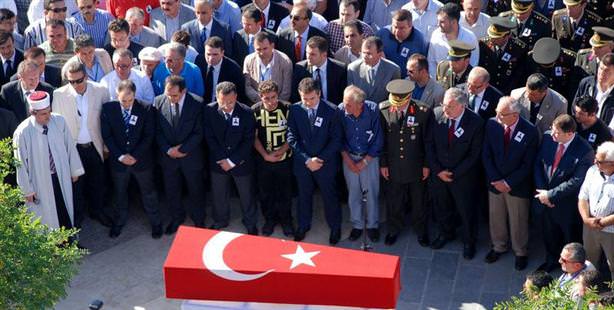 PKK terrorists staged a four-prong attack on Sunday night in the Beytüşşebap district of the Southeastern Anatolia province of Şırnak located near the Syrian border killing nine members of Turkey’s security forces.

The simultaneous attack took place at 22:00 last night as terrorists attacked a police and military complex in the town of Beytüşşebap late on Sunday night using guns and rocket-launchers. Nine security officials, including soldiers and police officers were killed in the attack. Police and soldiers returned fire triggering clashes that resulted in 29 deaths thus far and is still ongoing. Eight soldiers were also wounded in the attack. An operation has been initiated into apprehending the escaped terrorists.

Şırnak Governor Vahdettin Özkan has released an announcement stating, "An attack was staged by terrorists on military bases in Beytüşşebap. Nine security agents were killed and eight others wounded. Security forces returned fire immediately which triggered fierce clashes resulting in killing around 20 terrorists close to the border with Syria and Iraq" said Özkan.

A ceremony will be held in honor of the Turkish soldiers who lost their lives in the line of duty, after which their caskets will be sent to the hometowns to be buried.

The PKK, classified as a terrorist organization by Turkey, the United States, the European Union and much of the international community, has intensified assaults against Turkish forces and civilians in recent months.

On august 20th, the PKK exploded a vehicle with explosives in one of the most crowded areas in Gaziantep killing ten civilians, mostly children, and wounding 69. Meanwhile, the terrorists also killed five soldiers in a bomb attack on a military convoy two weeks ago. The Turkish military retaliated quickly, killing 21 rebels in an operation involving helicopter gunships.

Some Turkish officials and analysts have linked the chaos in Syria to the recent intensification of attacks. Speculation has surfaced over the possibility the group is getting direct support from Syria's
President Bashar al-Assad and Kurdish groups in Syria. Assad, who is battling a 17-month-old uprising against his rule in which the United Nations estimates 20,000 people have been killed, has denied that Syria had allowed the PKK to operate on Syrian territory near the Turkish border.

Since June last year, nearly 800 people have died in the conflict in Turkey, including about 500 PKK fighters, more than 200 security personnel and about 85 civilians, according to estimates by think-tank International Crisis Group.

AK Party Vice-Chairman Hüseyin Çelik says Tarhan's abduction has not yet been confirmed, however the provincial chairman has not been heard of since departing for Çukurca yesterday. His vehicle was found with the keys still in the ignition. "The related state departments are doing all that they can to investigation the situation at present," stated Çelik.