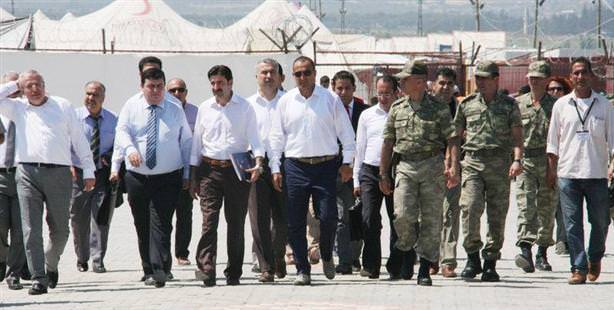 According to Üstün, the setup of the camp was not conducive to what the rumors suggest. "This camp appears to be no different than any others we have seen. There are tents and children, in other words, everyone is staying here. They are tight quarters and everyone is together, Therefore, we have been unable to determine any difference from any other camp, however our inspection is still ongoing," said Üstün.

"There are 2,764 people staying at this camp. Approximately 300 of them are soldiers, police and public officials. The remaining 80 percent are women and children. Therefore, it would be impossible for any other activity to be staged from here. They are having a hard time even being able to set up their tents. Therefore, as far as we can see, it is not physically possible for the allegations to be true," explained Üstün.

When asked why only reporters from Anadolu Agency were allowed to accompany them, Üstün stated, "Well, of course we have plenty of channels and agencies. However, we thought it would be most beneficial for Anadolu Agency to enter. That is because it would be impossible to bring all of the channels with us into the camp. The information on the visit will be provided by Anadolu Agency."

Üstün's committee visited the Apaydın camp and took the opportunity to speak with some of the refugees staying there. The committee also asked if there had been any refugees that had left for Syria and later returned, to which the refugees stated that there had been no such situation. One Syrian said, "The news on the television about the camp are all intentional lies and are not true." When asked if they had the opportunity to closely follow the developments in Syria, the refugees explained that they have had no contact and have just been following developments over the television.

The Syrian refugees also told the committee that they were receiving all of their needs such as shelter, medical assistance and food from the camp. The committee also visited the camp's medical center. The Syrians they spoke with stated that they were pleased with their situation at the camp and expressed their gratitude to the Turkish Republic, the Turkish public and to Prime Minister Erdoğan.