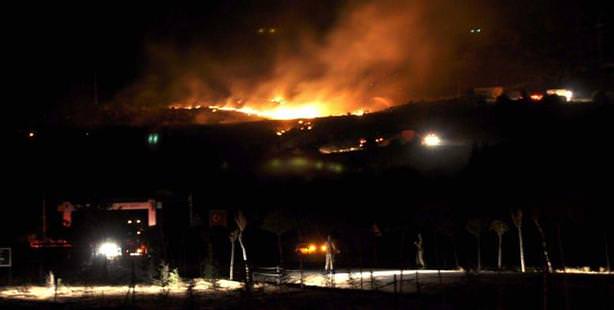 A huge explosion in a military ammunition storage facility which took place at 21:15 Wednesday evening in the western province of Afyonkarahisar has resulted in the deaths of 25 soldiers.

The horrific blast at an ammunition depot at the Şehit Uzman Çavuş Mete Saraç Barracks in Afyonkarahisar occurred at around 9:15 p.m. as officers were classifying the depot's hand grenades. Twenty-five soldiers were killed in the blast that quickly turned into an inextinguishable huge blaze.
Announcing that the explosion was the result of a work accident, Afyonkarahisar Governor İrfan Balkanlıoğlu stated, "This was an accident. It was not a terrorist attack nor was it any attempt at sabotage."

The blast, which took place as offices were sporting hand grenades at a military storage facility located between the Ataköy neighborhood and Kışlacık village, quickly escalated into a widespread fire. Dozens of firefighters, ambulances and search and rescue teams were dispatched to the area where the bomb squad had also arrived shortly after the blast. The five-kilometer surrounding area was closed off due to the potential of further explosions as the depot's hand grenade supply had been strewn in the blast. Twenty-five soldiers were killed in the explosion and nine wounded.

Afyonkarahisar Governor İrfan Balkanlıoğlu, Municipal Mayor Burhanettin Çoban and military officials were on site coordinating fire extinguishing efforts. Afyonkarahisar Mayor Çoban explained that they did not know the precise toll of how many soldiers were inside at the time of the blast."We cannot enter the site. Unfortunately there may have been deaths. This is an area located on the outskirts of the city that belongs to the Air Force. There is the danger that unexploded hand grenades may have been dispersed in the blast. All we know is that the explosion took place in the area where hand grenades are stored and transpired as the grenades were being classified."

Fire Department Chief Murat Gürsan explained that they were unable to enter the site of the explosion."Due to the ongoing blasts and the potential that unexploded ammunition may erupt, we have been unable to approach the site of the accident and cannot extinguish the fire."

LOCALS THOUGHT IT WAS AN EARTHQUAKE

A dust cloud developed in the sky following the blast as local residents ran outside of their homes mistaking the explosion for an earthquake. A number of windows in the vicinity shattered due to the rattling following the explosion. Some citizens were injured due to shattering glass, while panic spread amongst local residents. Some wanted to enter the area of the blast, however security forces stopped them and wasn't allowing anyone entry to the surrounding neighborhoods, stated eyewitnesses who also saw ambulances arriving and transporting soldiers.

Once soldiers began to be admitted in hospitals, urgent announcements were made requesting blood donations. Seeing the announcements on television, almost 2,000 people flocked to hospitals to donate blood. Some citizens remained waiting in line until the morning hours, when officials made a new announcement stating they had satisfied the need for additional blood.

Also of note was the sight of one wounded soldier, who was transported to the hospital, refusing to let go of his gun.

This is a translation of an article originally written by Mehmet Emin Güzbey.