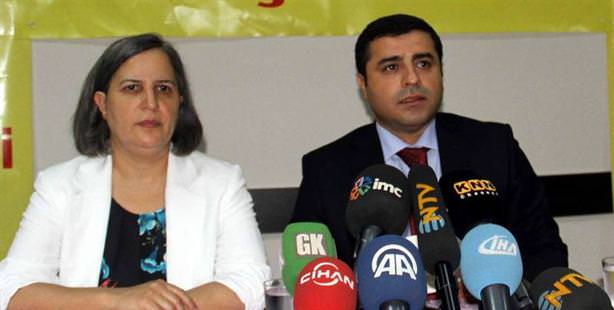 The Supreme Court of Appeals Political Party Records Office has requested copies of the indictments and rulings of cases on BDP filed under the ‘Anti-Terrorism Act’ from the fourth, fifth, sixth and seventh High Courts in Diyarbakır.

While the debate surrounding the organic relationship between the Peace and Democracy Party, or BDP, and the PKK continues, the legal system is now making a move. The Supreme Court of Appeals Political Party Records Office has sent a written request to four High Criminal Courts in Diyarbakır requesting copies of all indictments and rulings in cases involving BDP members being tried under the 'Anti-Terrorism Act.'

The bureau has announced that after investigating the case files opened against illegal activities by BDP members they may apply to the Supreme Court of Appeals Prosecutors' Office to request a case be opened to shut down BDP.

Due to the lack of sufficient votes on a constitutional amendment which foresaw party closure cases be left up to the incentive of Turkey's Grand National Assembly, the process to close a party still begins with the Supreme Court of Appeals Prosecutors Office filing a case with the Constitutional Court to seek a ruling.

THE FILES HAVE BEEN SENT

Upon receiving the written request by the Court of Appeals Prosecutors' Office, the indictments on ongoing cases involving the BDP being tried at the designated High Criminal Courts in Diyarbakır were sent to the Supreme Court of Appeals. At present, there remains to be a significant number of party members, administrators and even municipal mayors that are being tried in custody in cases involving the KCK and its branches in Batman, Mardin, Şırnak, Siirt and Şanlıurfa.

Certain BDP members are also being tried under the 'Anti-Terrorism Act' for knowingly and intentionally aiding active PKK members in rural bases, for committing crimes on behalf of the terrorist organization, for being a member of the organization and for providing logistical supplies.

The following are examples of just some of the files sent to Ankara:

The Municipal Mayor of the Karlıova district in Bingöl was arrested for providing materials and logistics to the PKK.
Fire from a BDP district building in Şırnak's Cizre district resulted in the death of a police officer.
A BDP District Official for Cizre was caught in possession of A-4 plastic explosives belonging to the terrorist organization.
One trial involves 14 suspects including BDP Cizre district officials.
In a search of a minibus that departed from the Kayapınar BDP district organization, security forces confiscated 114 molotov cocktails intended to be taken to a demonstration in Diyarbakır.

'THE AK PARTY'S JUDICIARY CAN NOT JUDGE US'

BDP Co-Chairs Gültan Kışanak and Selahattin Demirtaş held a press meeting in Diyarbakır yesterday, during which Demirtaş stated, "The AK Party judiciary cannot judge us. Any prosecutor or judge that tries the BDP will no longer have any legitimacy. No judge or prosecutor who takes orders from a prime minister will be considered legitimate by us. We can only be tried politically by the voters," said Demirtaş.