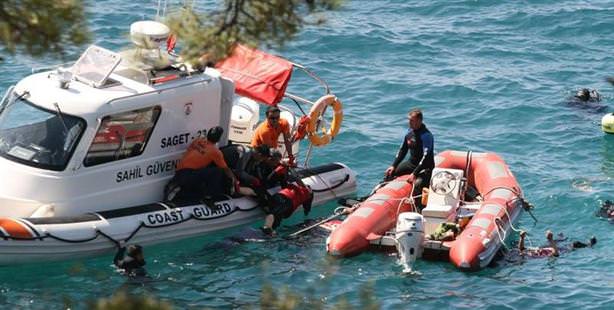 A boat transporting illegal migrants sank off of the coast of Izmir yesterday killing 61, mostly women and children, while 57 people were rescued alive.

The 30-meter fishing boat was carry over 100 refugees, including women and children, when it hit rocks just 50 meters off of the coast of Izmir's Menderes district early yesterday morning. Fifty-seven people, who were on deck at the time the boat sank, managed to save themselves by swimming to the shore. The migrants who were locked in a cabin inside the boat all died, most were women and children. Coast Guards have found 61 bodies, and apprehended the captain and his mate who swam to shore for human trafficking.

The illegal migrants, mainly Syrian and Palestinians were staying in hotels in the Basmane district and had been brought by smugglers to a village in Ahmetbeyli by two different trucks before boarding the fishing boat.

Half of the migrants were on deck and half were being kept in a locked cabin when the 30-meter fishing boat took off at approximately six a.m. Thursday morning. Just 50 meters into the coast, however the boat hit rocks for an inexplicable reason. Most of the migrants on deck swam to safety on the shore, where citizens alerted security forces and gendarmerie, the coast guard, and ambulances were dispatched to the region. The migrants that made it on shore were taken to local hospitals. According to statements provided by the illegal migrants who were mainly from Syria, Palestine and Iraq, while staying in various hotels in Izmir's Basmane district they made arrangements with human traffickers to be transported to Europe.

When those migrants that were saved explained that there were a significant number of women and children locked in a cabin inside the boat, Coast Guard divers began an underwater search. A total of 61 bodies have been recovered. Out of those, 31 were children, including two babies, 18 were women and 12 men.

The captain and his mate managed to swim to shore as the boat sank and both have been arrested. They had rented the boat from fishers in Kuşadası. A thorough investigation is now ongoing to find anyone connected to the smugglers and the hotels involved.

The 57 refugees that were rescued will be deported.

This is a translation of an article originally written by Fatih Şendil.