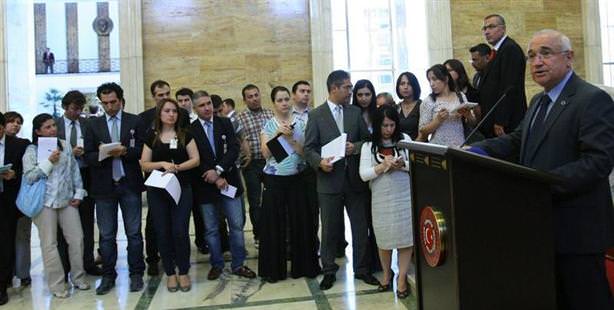 The long-standing debate amongst the Parliament Constitution Reconciliation Commission surrounding the status of ‘atheists’ has come to a close.

The decision was reached to include a provision for atheists in an article on religious freedom and liberty of conscious.

During the commission meeting yesterday, Speaker of the Assembly Cemil Çiçek complained that the process of drafting the new constitution is taking too long. The debate surrounding the Peace and Democracy Party, or BDP, choosing to leave the table was also discussed.

The AK Party eased their stance regarding their opposition to the inclusion of a provision on the freedom of 'non-belief,' a proposal which had been brought up at previous meeting.

As a result, all party members present reached a consensus on including a provision intended to protect the nation's atheists, stating, "Everyone has the right to freedom in their religious beliefs and liberty of conscience. This freedom encompasses religious belief, non-belief as well as changing one's faith."

During the meeting, the decision was also reached to establish a sub-commission in order to expedite efforts on establishing Turkey's new constitution.