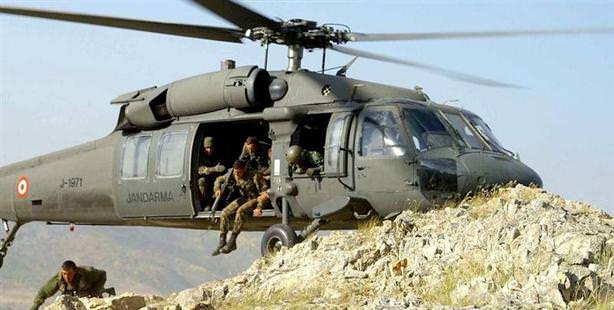 In ongoing operations in the Southeastern provinces of Hakkâri, Şırnak and Diyarbakır, the Turkish Armed Forces has killed 115 terrorists. In Northern Iraq 25 terrorists have been killed. Chief of General Staff Özel paid a personal visit to the troops in Şemdinli, where seven battalions are engaged in a widespread operation on the terrorist organization.

The PKK terrorist organization has been struck hard in operations staged by Turkish troops over the past week in Hakkâri's Şemdinli and Şırnak's Beytüşşebap districts as well as in rural regions of Diyarbakır. The PKK is suffering great losses as special trained teams take part in point operations in Hakkâri and Şırnak.
Perhaps the most large-scale and comprehensive operations are being staged against PKK terrorists, who just last week were setting up road blocks on the skirt of the Goman Mountain along the border with Iraq. Thermal cameras are being set up in strategic points, while terrorists detected by Herons are being point targeted by F-16s and Cobra helicopters.

September 7: Twenty-six terrorists were killed on the skirts of the Kato Mountain in Beytüşşebap.

September 9: Two soldiers were killed in conflict that arose in Zorgeçit, Şemdinli. Twenty-six terrorists were killed, while one was taken into custody.

PINNED IN BY SEVEN BATTALIONS

Chief of General Staff General Necdet Özel was joined by Air Forces Commander General Mehmet Erten and Land Forces Commander General . Hayri Kıvrıkoğlu in a trip to inspect the military units in Hakkâri-Yüksekova and Şemdinli. Özel was briefed on the ongoing operation in Şemdinli being staged by seven battalions in the Second Military Command. They later moved on to the Hakkâri Mountain and Commando Brigade. According to the information learned, a significant number of terrorists have been killed in the regional operations.

Helicopters and howitzers rained on a group of PKK terrorists who were preparing to stage an attack on police in Hakkâri's Helin Valley. Four train wagons were derailed in Muş on the Elazığı-Tatvan line as a result of bombing by PKK terrorists. Last night terrorists staged an attack on a police post in the district official building in Şırnak's Beytüşşebab district. No one was injured in the attack. Meanwhile, conflict also erupted with security forces when PKK terrorists attempted to attack a police checkpoint on the Bitlis- Diyarbakır Highway.