Jolie expresses gratitude to Turkey for its aid to Syrian refugees 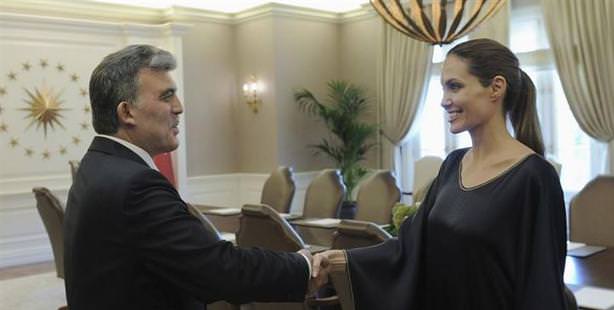 Guterres and Jolie's first stop in Ankara was to the Ministry of Foreign Affairs. After meeting with Deputy Foreign Affairs Minister Naci Koru, Jolie and Guterres were then hosted by Deputy Prime Minister Atalay. Minister of Interior Affairs İdris Naim Şahin also joined in the meeting which was held at the Prime Ministry.
Later, Jolie attended press conference held at Ankara Palas where she expressed how extremely grateful she was to the Turkish public for opening their borders and hearts to Syrian refugees. Jolie said she sees that Turkey is doing all they can to help those arriving from Syria. Guterres stated that Turkey is offering very high quality services for the refugees and drew attention to the fact that this involved a great financial investment.

Jolie explained that the refugees are able to witness the ongoing violence on television, which only makes them feel like they have been left on their own. Emphasizing that the Syrian nationals that have been forced to abandon their countries to seek shelter abroad are experiencing significant trauma, Jolie stated, "I share everyone's concern about the winter approaching. With the violence and the conflict showing no signs of easing up and the number of refugees growing, it is a very large concern for all of us. I hope nobody freezes to death." Jolie called for collaboration to find a solution to this issue.

"These are scary times. I will continue working on this issue. Meanwhile, I want to thank all of you and especially the Turkish government for helping these people," stated Jolie.

ATALAY: THERE IS NO SUPPORT

Deputy Prime Minister Beşir Atalay shared with Guterres and Jolie that Turkey is not receiving the support needed for Syrian refugees from the international community.

Atalay addressed Jolie personally by stating, "Your visit is very important to us. We find it to be of extreme significance in drawing the attention of the international community to the ongoing drama unfolding in Syria and the plight of those forced to leave Syria for Turkey."