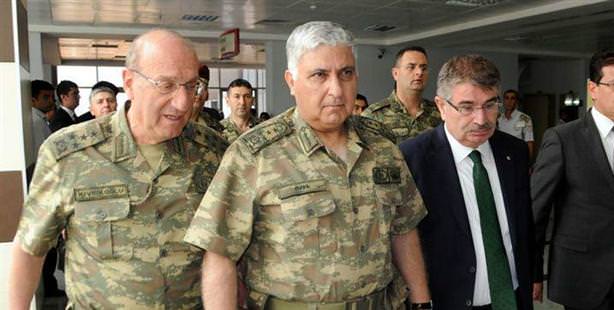 An operation personally overseen by Chief of General Staff General Necdet Özel in Hakkâri's Şemdinli district has encircled a 200-member group of terrorists within the city center, closing off all routes of escape.

Approximately 4,000 soldiers are serving in the ongoing operations in Şemdinli with the elite 'Maroon Berets' and Gendarmerie Special Forces (JÖH) amongst the ranks. Operations continue in Mount Goman, the Mergesav district, and in certain spots in the Bağlar and Günyazı villages. Thursday night. F-16's and Cobra jets bombed rural regions in Şemdinli as well as areas along the border with Iraq. In the morning hours the helicopters returned to outposts in order to dispatch soldiers in Şemdinli.

A SPECIAL BRIGADE FOR ŞEMDİNLİ

According to the information obtained, General Özel has ordered the assignment of a permanent commando brigade to replace the current system of shifting troops to provide security in the region. This special commando brigade which will be assigned to securing the region and to provide immediate response will consist of 700 personnel, most of which will be brought in from the 23rd Motorized Infantry in Istanbul.
Combat also erupted between security forces and PKK terrorists who attempted to stage an attack with a bomb-laden vehicle on the Tepe Gendarmerie Station in Diyarbakır's Lice district. One soldier was wounded in combat and an air operation was initiated in the region.

Explaining how the attack was intervened, Diyarbakır Governor Mustafa Toprak stated, "Two missiles were launched on the military station just as the vehicle exploded, however the alertness of the soldiers on duty prevented the attack from further escalating."

This is a translation of an article originally written by Ceyda Karaaslan and Necmi Ertuş.