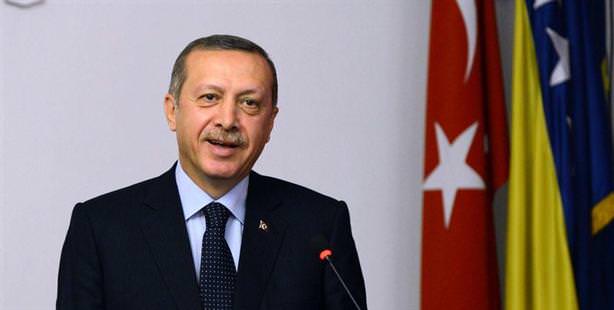 “Over the past ten years, extremism in Turkey has been filed down. In a sense we have acted like a lightning rod, relieving some of the pressure”, says Erdoğan explaining why Turkey remains calm in response to the release of inflammatory footage depicting the Prophet Muhammad.

Speaking to journalists on his return from a series of visits to Azerbaijan, Ukraine and Bosnia Herzegovina, Prime Minister Recep Tayyip Erdoğan talked about the trailer for the film "Innocence of Muslims" which has instigated violent riots all over the world including the death of a U.S. ambassador in Libya and three other embassy staff.

The following are the Prime Minister's responses to a series of journalists' questions:

There are reactions; however they do not seem to be escalating. Egyptian President Mohamed Mursi's remarks seem to have influenced people.

Will Turkey be exerting any effort to ensure insulting beliefs is considered a crime?

I will be bringing this issue up at the UN General Assembly. There needs to be international legislation dealing with attacks on people's sacred and religious beliefs. As Turkey, we will take the lead. Freedom of thought and belief ends where the freedom of thought and belief of others begins. In an international meeting in Warsaw, I was able to include Islamophobia listed as a hate crime in the final statement released.

Arab streets are in revolt, whereas Turkey is calm. What is it that separates us from them?

There are messages we have delivered. And the community pays heed to these messages. If you do not deliver messages, then what? Then the public flocks to the streets. Over the past ten years, extremes in Turkey have been filed down. In a sense we have acted like a lightning rod and have relieved the pressure. If this had not happened then who knows… We also lived through the Pre-1980 era. With the steps taken every day and in every area, we have ensured progress through legislation. There are Turks studying here in Bosnia that come to us crying saying, 'You have opened the doors to universities and imam hatip schools'.
The percentage of female students that would have to come here to study has fallen from 60 to 70 percent down to 35 to 40 percent. It may not seem like much in numbers, however it relieves the tension."

Will steps be taken in national legislation to make this a hate crime?

There needs to be legislation that considers insulting religions a crime. If there are any ambiguities in the legislation, then we need to rectify that.

What will your message to the UN be?

"I am the prime minister of a nation of which most are Muslim that has declared anti-Semitism a crime against humanity. However the West has not recognized Islamophobia as a crime, it has only encouraged it. For example in Europe, Germany…

(The film director) says he did this to provoke the fundamentalists amongst Muslims. How can there be a film like this targeting five million?

Will you request the convening of an international meeting to discuss hate crimes and the film which insults Islam?

We may embark upon establishing this sort of international meeting in order to ease the situation. We could do this under the roof of the Alliance of Civilizations.

The US administration is not doing what is expected…

Do you have a B plan when it comes to Syria?

Seeking results from the UN Security Council was our A plan. When that didn't fruition what did we do? We began a new process with a proposal put forth by Egyptian President Mursi. However in the meantime we have also used a series of interim instruments. We said lets work in a 'Russia, Iran, Turkey' tripartite. Once again we were unable to reap results. Putin and Medvedev said; let's have our foreign ministers handle it. Then they asked, but if he goes who will come in his place? I said don't even ask the question of who will fill Assad's place because if it is democracy we are talking about, then it is whoever the public wants that will fill his place. The whole process came to an end when it came to it being the public's choice. They are seeking someone they will be able to command.

What is your assessment of the United States' stance?

The United States has not yet intervened. It is Russia and Iran that are influential. Russia has taken on a negative position and China is acting with them. This combined stance is also affecting Iran.

Could Iran change their position?

Let's try every route possible. Let's try the Turkey, Egypt, Saudia Arabia and Iran foursome. Let's see what comes of it. We continue to be in contact with Iran. China has told us they now see eye to eye with us; yet again they went and acted alongside Russia in the U.N.

Does the United States support us?

The United States supports us; however I don't know what their choices are. Right now, they are not doing what is expected of them.

There have been meetings with the Director of the CIA, with the Joint Chief of Staff as well as senator level meeting. What do they propose?

They are all well aware of Turkey's influence in the region. This does not solely have to do with the United States' intelligence organization. The same thing is true for Russia. They see it, Israel also sees it. You cannot pull the plug from the world. The U.S. Joint Chief of Staff was most likely paying a return visit. Regional issues will be discussed during these meetings.