Davutoğlu: We share the same perspective as Egypt on Syria 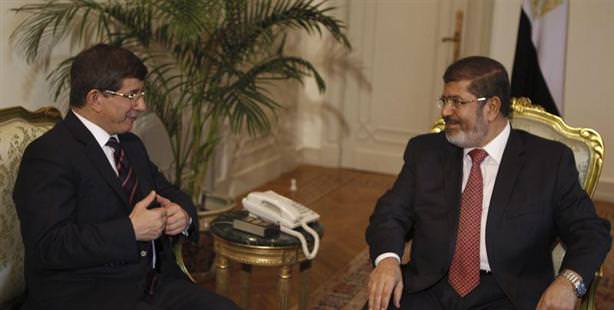 Foreign Affairs Minister Ahmet Davutoğlu states, "Turkey shares the same perspective as Egypt when it comes to finding a solution to the situation in Syria.”

Davutoğlu, who is in Cairo in order to attend the 'Islamic Quartet' meeting, which has Turkey, Egypt, Saudi Arabia and Iran convening to discuss the Syria crisis, had the chance to meet personally with Egypt's new President Muhammed Morsi at the Ittihadiya Palace.

Speaking to the press following the meeting, Davutoğlu stated that a number of issues were discussed with Egyptian President Morsi, however they focused on two main issues, namely the situation in Syria and Turkish-Egyptian relations.

Emphasizing that Turkey has done all that it can to halt the bloodshed in Syria, Davutoğlu stated, "We support President Morsi's stance on Syria which he shared in both Mecca and Tehran. When it comes to reaching a solution to the Syria crisis, Turkey and Egypt share the same position and perspective."

Davutoğlu also announced that in October Morsi will be visiting Turkey while Prime Minister Recep Tayyip Erdoğan has plans to visit Egypt. We will build a new Middle East in cooperation with Egypt and with the participation of other states," said Davutoğlu.