General Dempsey: Turkey should be wary of Syrian threat 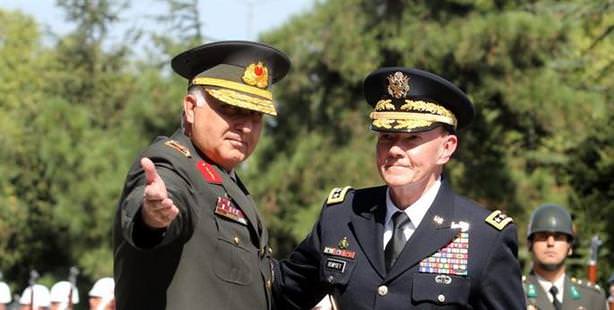 U.S. Chairman of the Joint Chiefs of Staff General Martin Dempsey paid a visit to Turkey’s Chief of the General Staff Gen. Özel during which he warned his Turkish counterpart to be wary of Syria’s chemical and biological weapons.

A four-star summit on Syria was held between the two top commanders at Turkey's General Staff Headquarters in Ankara. US Joint Chiefs of Staff General Martin Dempsey arrived to Ankara on Sunday as a very special guest of his Turkish counterpart General Necdet Özel.This was Dempsey's first trip to Turkey since being appointed as the United States' top commander and the General was greeted with an official ceremony upon his arrival to the General Staff Headquarters in the capital.

After the ceremony, Generals Dempsey and Özel held a meeting in which they discussed the crisis in Syria, the influx of refugees through Turkey's borders as well as the camps set up in Turkey to accommodate them.

During the meeting, Dempsey pointed out his concern over the presence of Syria's chemical and biological weapons. According to the information obtained, General Dempsey warned that even though a clear threat has not yet been made to Turkey, "it is important to remain cautious."

Also discussed during the meeting were the two nations' joint strategies and road map to combat the PKK terrorist organization. The issue of instantaneous intelligence sharing was also brought to the table and General Özel, expressing that during this time of increased security measures and attacks, reiterated Ankara's request the United States extend their drone flights over northern Iraq up to 24 hours a day in order to assist in providing instantaneous intelligence on the locations of PKK activities and bases.

In addition, the two also discussed the potential projects Turkey can take on along with other ally member nations as part of NATO's new Smart Defense Project.