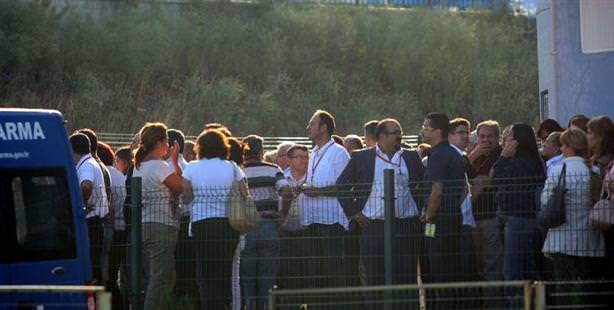 The court has sentenced the top three commanders out of the 365 army officers being tried in the Sledgehammer coup plot case to 20 years imprisonment.

Çetin Doğan, Özden Örnek and İbrahim Fırtına were initially sentenced to aggravated life imprisonment, however the sentence was dropped to 20 years for their unsuccessful attempt to stage a coup. The three generals are also charged with leading a criminal organization.

The court has acquitted 34 army officers of all charges in the Sledgehammer case. Retired Brigadier

General Levent Ersöz's file has been set aside, because he has yet to testify. Ersöz is under arrest pending trial for the Ergenekon case, which he is stated to be a 'key figure' in.

The court released the verdict on Friday in a trial in which 365 suspects, 97 of which are generals, are being charged with involvement in the Sledgehammer (Balyoz) Plan, in which a variety of elaborate schemes were planned intending to overthrow the government.

The court resumed today at 14:00 to hear the final statements of four commanders that were absent from yesterday's hearing after which the court took a break only to return at 17:27 to begin reading out the highly anticipated verdict which will affect 365 active or retired military members.

Just 40 minutes before the court resumed, at 13:20, defendant Colonel Turgay Bülent Göktürk, who was being held under arrest, suffered a heart attack.

The verdict was expected yesterday, however after a seven hour and 15 minute hearing on Thursday, Chief Judge Ömer Diken announced that due to the excessive number of defendants deliberations were lengthy and therefore they had decided to release the ruling on Friday at 14:00, which was received by applause from the spectators in the courtroom.

The trial, which revolves around a 2003 military seminar that prosecutors say was part of a plot to
overthrow Prime Minister Tayyip Erdoğan's government, has been ongoing for one year and nine months. The conspiracy is alleged to have included plans to bomb historic mosques in Istanbul and to trigger conflict with Greece to pave the way for an army takeover. Prosecutors have demanded 15-20 year jail sentences for the 365 defendants.

In his final plea, retired General Çetin Doğan criticized the judicial process by stating, "I hope the decision you make is good for you. Those who should be commemorated with respect are instead the suspects of today's false trials. Those who provide license to these sorts of courthouses are applauding in justice and lawlessness."

Defendant Ergin Saygun stated, "The trial has now reached the verdict stage, however a number of witnesses, whose statements could affect the outcome of the trial, have not been heard."
"As the trials so far have not been fair and lawful, the verdict can only be political," said Bilgin Balanli, a four-star general who was among the defendants to make a final plea on Thursday. "This verdict will not be made about us, it will be made against the Turkish armed forces," he told the court.

All but a few of the defense lawyers were absent from the final hearing in protest at the judges' decision to reject demands for further investigation into the authenticity of documents key to the prosecution's case. The majority of defendants supporting their attorneys' protest of the court responded by stating, "Because my right to a defense is being restricted, I believe I am being tried unfairly. I do not want to make a defense without my attorney present," in lieu of providing final pleas.

The trial on the Sledgehammer (Balyoz) Plan began on December 16th, 2010 at the courthouse located next to the Silivri penitentiary. The first investigation into the Balyoz coup plan began following an article released by Taraf newspaper on January 30th, 2010. The article claimed that on March 5-7, 2003, the Sledgehammer Action Plan was laid to the table at a military seminar.

A series of documents have since surfaced both connected to the seminar as well as independent documents detailing preparations for a coup. Journalist Mehmet Baransu turned in a suitcase to prosecutors he said was given to him by a patriotic officer. The case was first opened on July 19th, 2010 and the first trial held on December 16th, 2010. On December 6th, 2010, new documents were uncovered detailing coup plans at a search conducted at the Naval Headquarters in Gölcük. Then on February 21st, 2011 a flash memory was confiscated from a colonel's home in Eskişehir which contained a series of additional documents supporting the case. Two separate new cases were filed as a result of the new evidence, however later the two files were joined with the initial Sledgehammer case and have since been tried as one case.

Suspects claim that due to the nature of the evidence uncovered being primarily digital-based; they are fraudulent and were not prepared by them. According to allegations, the plan involved dragging the nation into chaos and eventually martial law, by exploding bombs in the Fatih and Beyazit Mosques and staging events geared to incite anger amongst conservative, non-Muslims and leftists groups. The plan also involved the bringing down of a Turkish jet in the Aegean, by either the Greeks or the Turkish military itself. Prosecutors purport that this plan is identical to the plan the September 12th coup was based on.

WHAT ARE THEY BEING CHARGED FOR?

Retired General Çetin Doğan (Former Commander of the First Army): The number one suspect in the case, Doğan is perceived to have personally devised the overall plan, including the Çarşaf, Sakal, Oraj and Suga plans. However, Doğan claims that the action plan was prepared as part of his duty to protect the Turkish Republic as dictated by the Internal Service Act. Voice records from the March 5th-7th seminar held at the Selimiye Barracks in 2003 show that Doğan stated, "I will tell the Chief of General Staff and the Land Forces Commander to give the parliament and the government a warning-like ultimatum telling them to stop pursuing this route."

Retired General İbrahim Fırtına (Former Air Forces Commander): Fırtına was serving as the Military Academy Commander during the time the Balyoz Plan was devised. He signed off on one of the most important stages of the Sledgehammer Plan, which was referred to as the 'Oraj Plan,' which involved the downing of a Turkish warplane in the Aegean.

General Bilgin Balanlı (Supreme Military Council Member): Balanlı was arrested in May of last year while actively serving as Military Academy Commander. He was expecting to be appointed as Air Force Commander, however once arrested he was appointed to the more passive position of member of the Supreme Military Council. Documents recovered in former colonel Hakan Büyük's home in Eskişehir point to Balanlı having prepared a B plan in case the 'Oraj Plan' did not succeed.

Retired Lieutenant General Engin Alan: At the time the Sledgehammer Plan was devised, Alan was serving as the Commander of the Second Army Corps. Alan attended the First Army Plan Seminar, which is stated to be the seminar from which the coup plan surfaced. The commander was supposedly intending to serve in the coup with his army corps.