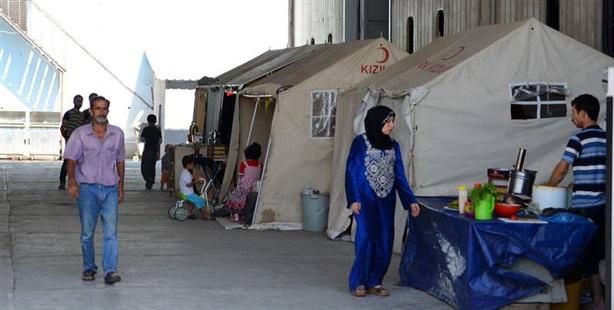 The number of Syrians in Hatay, which has acted as a hub for refugees, has now been fixed at the 11,000 level. After a series of ‘quiet evacuations’ a number of Syrians who were sleeping on the city’s streets have since been placed in camps in Urfa.

The state has had to take action in order to rectify some of the difficulties suffered by Hatay residents due to the excessive number of Syrian refugees seeking shelter in the border province. The critical decision was made to begin relieving the area of refugees at the August 28th National Security Council meeting. The decision was then solidified at the Council of Ministers and slowly the process of quietly evacuating Syrian refugees began.

Due to the incoming complaints from Hatay residents and the occasional demonstrations staged by Bashar al-Assad supporters, the approximately 1,000 Syrian nationals that had been living on the streets or in homes in Hatay proper, have been transferred to the Ceylanpınar camp in Şanlıurfa. The majority of those staying at the five camps set up in Hatay are people that have been placed under special protection.

NUMBER OF POLICE INCREASED IN THE REGION

The majority of Syrians with passports that crossed over to Hatay in the summer months, when immigration was heavy, had begun to sleep on the streets and in parks and gardens in the main city. This situation led to an increase in crime and instability in the region. With the decision made by the National Security Council, the Syrian refugees that were sleeping on the streets were instead brought to camps in Şanlıurfa. In addition, the number of police and other public officers employed in the region has since been increased.

Due to local residents' excessive complaints regarding the Syrian refugees that have rented out homes and are living in the city, police have taken action by way of warning the Syrian nationals that crossed over using their passports that they are only allowed a three-month visa-free entry telling them they need to either exit and re-enter Turkey, or they will have to go to the refugee camps. With the start of the school season, the Syrian refugees who were staying in the city's various state institutions were also transferred to refugee camps in other provinces, which has helped ease the burden off of Hatay.

There are still the Altınözü, Yayladağı, Reyhanlı, Apaydın and Karbeyaz camps set up for Syrian refugees in Hatay. For over a year now, the Syrians that have come in have entered through Hatay and therefore they would initially stay in one of these camps. This process however has now been changed. Refugees that enter through Hatay are now transferred directly to camps in Şanlıurfa and Gaziantep.

Initially, it was planned that only three cities in Turkey would be designated for camps to house Syrian refugees. However, since then in addition to Kilis, Osmaniye and Maraş, a tent city is now being planned for Adıyaman. As of today, there is a 20,000 person available capacity in the nation's camps erected for Syrian refugees.

The number of Syrian refugees in camps in Turkey reaches 84,000

The Prime Ministry Disaster and Emergency Management Presidency (AFAD) recently announced that there are a total 84,084 Syrian refugees staying in either one of the 11 tent cities erected throughout the region or in the temporary admission center or the one container city in Kilis.

The announcement stated that there are five refugee camps in Hatay, two in Şanlıurfa, two in Gaziantep and one each in Kahramanmaraş and Osmaniye totaling 11 as well as the 12,000 person capacity container city in Kilis, while efforts to establish camps in Gaziantep's Nizip and in central Adıyaman are currently ongoing.

The announcement emphasizes that all of the refugees' needs are being provided for in the camps, and states that up until now, a total 123,140 Syrians have entered Turkey while 39,056 of that figure have since returned. In addition, there are currently 551 Syrian nationals receiving treatment in hospitals throughout the region, 469 of which are patients themselves and 82 people who are accompanying them.

Meanwhile, an additional 13 wounded Syrians were brought to Kilis yesterday. The announcement noted that the wounded were admitted to the Kilis State Hospital; some are in critical condition however and are still being treated in the intensive care unit.