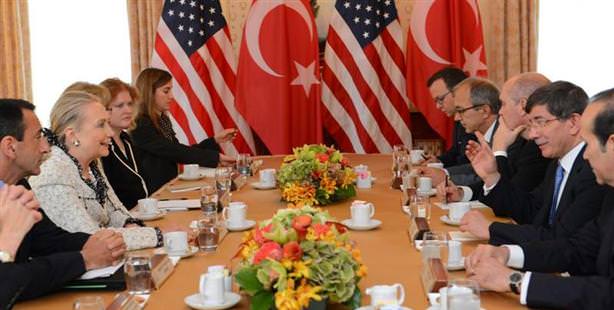 Discussing the anti-Islam provocative film released in the U.S. with members of the press yesterday, Ahmet Davutoğlu announced that Turkey has begun a new initiative with Brazil and Sweden referred to as the "three soft powers from three continents" in order to deal with respecting sacred values and the limitations of freedom of speech. Davutoğlu explained that the foreign ministers from these three nations will be working on drafting international documents for the release of a UN initiative on respecting sacred values.

Speaking to the press, Davutoğlu mentioned that protests in response to the provocative "Innocence of Muslims" trailer have targeted diplomats. With Turkey also having lost a number of diplomats in terrorist attacks, Foreign Minister Davutoğlu said that Turkey will also be joining forces with these two nations in order to work on an initiative establishing measures to increase security for diplomats.
Davutoğlu also underlined that he will be exerting a strong effort to bring up the issue of insulting sacred values at the UN Alliance of Civilizations meeting.

During a meeting with U.S. Secretary of State Hillary Clinton, Davutoğlu and his U.S. counterpart shared views on how they could help in further empowering the Syrian opposition. The highly debated film, which contains incessant insults to Muslims, was also discussed and Clinton thanked the Turkish government for their announcements in connection to the attack on U.S. diplomatic representatives. During one on one meetings held on the sidelines of the UN General Assembly, Davutoğlu expressed discern for the UN Security Council's inability to make decisions at the place and time necessary.