“If the PKK drops their weapons the problem would be solved” 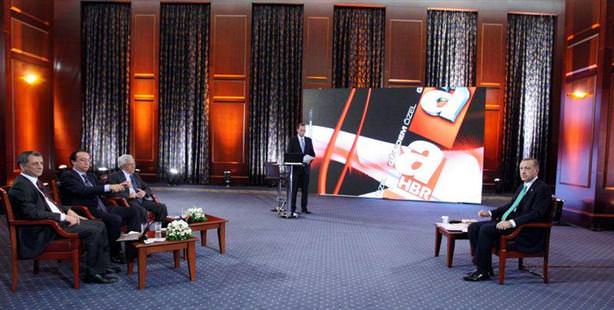 "The PKK has an issue with representation. We were not the reason negotiations came to a halt. However, a deal is not possible until the terrorist organization buries their weapons.”

Prime Minister Recep Tayyip Erdoğan was responding to questions by SABAH Chief Editor Erdal Şafak and columnists Süleyman Yaşar and Mahmut Övür on a joint broadcast by Atv and a Haber prior to this Sunday's AK Party Congress, when he stated the following:

ARE WE GOING TO ASK KILIÇDAROĞLU: "There's no saying when or what (main opposition leader) Kılıçdaroğlu is going to say. He says he is in favor of holding Oslo and Imrali (PKK) negotiations; however he also says the content is what matters. We are not going to plan that with him. We are politicians; however when it comes to this point, the National Intelligence Organization is assigned to hold these sorts of negotiations. Previously, despite all of the objections, we began a deliberation process with the PKK leader and with Oslo; however we had to stop when we noticed the insincere approach to our efforts.

THERE COULD BE A NEW OSLO: The Habur process is one in which we did not receive the response we expected from our sincere efforts. We told BDP (the Peace and Democracy Party) to not be concentrated in one area. However, unfortunately they turned it into another demonstration. Despite everything, we are taking steps and we would do it again. It is an issue of timing now. It could happen at any moment. It could even be abroad, if it isn't Oslo, it could be somewhere else.

THERE IS A REPRESENTATION ISSUE: I don't know what sort of authority they have been granted, however those who come to represent the terrorist organization, do not seem to have any sort of serious authority. Those (terrorists) in the mountains, those on the island and those in Europe all say something different. Then there is the whole KCK (an offshoot of the PKK) aspect, which is a whole other thing. Meanwhile, the leader is on an island (Imrali Prison). This is the kind of structure we are dealing with.

THE WEAPONS MUST BE BURIED: If any solution is going to be reached, the terrorist organization must relinquish their weapons. It will be impossible to reach any sort of deal, as long as they are still armed. Ms. Leyla Zana said 'let's silence the weapons'. What I said was, the issue is not silencing the weapon; it is being rid of them completely. When they drop their weapons, operations will also come to a halt.

POLITICAL EXTENSIONS HAVE NO AUTHORITY: We are not the ones to drop the ball on negotiations with the organization's political extensions. How is it reflected on this country when its own parliamentarians and deputies are embracing terrorists that have come down from the mountains? While we are running the country, we are also politicians. At the same time, I have to measure what the general public's impression would be. We are saying let's engage in political negotiations, yet they go and greet and even kiss those holed up in the mountains. To revisit the Oslo talks or to go to Imrali is not unfathomable for us. However, this political extension no longer has any authority on the matter."