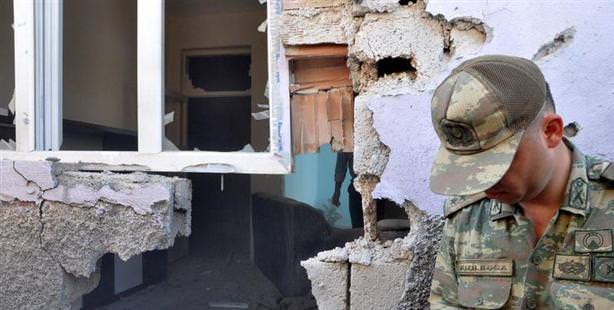 A mortar bomb fired from Syria made it past the border into Turkey’s Akçakale district located along the border. By sheer luck, no one was heavily injured, however two homes and a number of business locales suffered property damage.

The mortar bomb was said to have been fired during combat between Assad's forces and members of the Free Syrian Army which has been ongoing in Syria's Tel Abyad district since the opposition took control of the town of Rakka two weeks ago. The conflict in neighboring Syria has affected border areas in the past when stray bullets have flown into Turkish territory. Mortar fire in Tel Abyad could be heard along neighboring border towns in Turkey occasionally.

The fact that the mortar bomb was fired into Turkey on Friday and landed in a neighborhood located near a government office in Şanlıurfa's Akçakale district has brought the question of whether Turkey will follow its newly established rules of engagement. In April, Turkey officially reported an incident to the United Nations in which at least five people, including two Turkish officials, were wounded when cross-border gunfire hit a Syrian refugee camp in Kilis, further west along the frontier. Turkey beefed up its troop presence and air defenses along its 900-km border after Syria shot down a Turkish reconnaissance jet in June. At the time, Turkish Prime Minister Tayyip Erdoğan said the military's rules of engagement had been changed and that any Syrian element approaching Turkey's border and deemed a threat would be treated as a military target.

Due to the recent rise in violence in Syrian border towns, a week ago Turkey positioned additional tanks, anti-aircraft weapons and howitzers along the Akçakale border. However, due to the fire being accidental and from combat erupted amongst Syrian groups, no imminent threat has been detected being directed at Turkey. Turkish forces are on full alert in order to possibly respond to Syria should there by an incoming element posing a direct threat.