President Gul: On Syria, “Our stance before history is just” 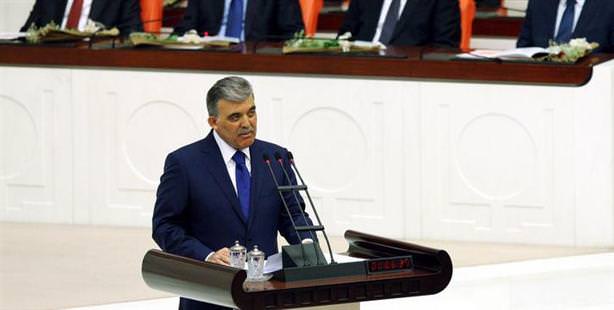 During an address in parliament delivered to mark the first day of the new legislative year, President Gul stated, “We held a principled approach irrespective of differences in race, religion, sect or ideology. Our stance before the tide of history is fair and just.”

President Abdullah Gül delivered the opening address for the start of the new legislative year for Turkey's Grand National Assembly.

In his October 1st address, Gül called for a new modern constitution, said "democracy does not embrace terrorism, expressed his opinion that elected deputies should be present in the assembly until they have been served and said that the economy should not be guided by instruction but instead by "pursuing the right policies".

The following are a series of excerpts from Gül's 26-page and 36 minute-long speech marking the start of the new legislative year:

BECOMING LIKE TURKEY: "As a democratic and secular country where the majority of the population is Muslim, Turkey stands out. "Becoming like Turkey" has indeed become an aspiration for some populations in the world today…. There is no doubt that these merits we possess have placed an additional responsibility on the country itself and especially on the shoulders of those who have the responsibility to run it."

OUR STANCE BEFORE HISTORY IS JUST: "In Syria, we are faced today with a regime that before the eyes of the world responds to the legitimate aspirations of its own people by using heavy weaponry, including warplanes. We held a principled approach irrespective of differences in race, religion, sect or ideology. Our stance before the tide of history is fair and just."

JOINT RESPONSIBILITY: "From this rostrum, I would like to make an appeal to the international community. Stopping the bloodshed in Syria is our joint responsibility. Recent history has shown how such events turn into outright massacres when the international community fails to carry out its duty. For this reason, these events should not be observed through a Cold War mentality or purely based on interest; we must all show courage and determination by adopting an approach that recognizes our responsibilities toward humanity and respects rights and justice."

FRIENDS AND ENEMIES ARE COMMONLY CONFUSED: "In matters of foreign relations, friends and enemies are commonly confused; feelings of revenge step in and jealousies are reactivated. We must therefore carefully examine the side effects of the policies we pursue and try to understand the threat perception of each country in the region."

NEIGHBORLY RELATIONS: "We have resolutely implemented a long-term strategy of prioritizing stability and security and solving problems based on solidarity and mutual cooperation in the region. Despite the many obstacles that have appeared before us along the way, we have adhered to this policy unwaveringly, proving our sincerity to the countries in the region and to our neighbors."

ECONOMIC RESULTS CANNOT BE ACHIEVED BY INSTRUCTION: "Global economic success in this day and age is possible through a sustainable growth trend and a stable economic environment. We must also remember that the results we desire may be achieved not by instruction, but only by pursuing the right policies. I would like to emphasize that we should not be contented with the temporary achievements of current policies; we must not lose sight of the strategic vision for implementing medium to long-term structural reforms for a stronger structural economic foundation. We have fallen in this trap in the past and the consequences are well-known to us. Our goal should be to achieve high growth without a current account deficit and without distorting price stability and financial stability"

WE SHOULD AVOID OVER-CONFIDENCE: "Over-confidence and complacency are sentiments that administrators of the economy should always avoid."

A MESSAGE TO THE DEPUTIES HELD IN CUSTODY: "It is my belief that everyone who has legally participated in the country's elections, voted for by the people and won the right to carry the title of a member of parliament, should be a part of the legislative activities of this Assembly until a final judgment has been passed."

A MESSAGE ON THE PRESIDENTIAL SYSTEM DEBATE: "In this process, the discussion of many issues and different constitutional systems and their advantages and disadvantages is a healthy discussion… There are examples of successful implementation around the world for these systems as well as other examples with serious challenges in implementation. The important thing is to take the practice around the world into consideration and discuss all aspects in their entirety."

JOURNALISTS SHOULD NOT BE IMPRISONED: "No one should be imprisoned for expressing their views through the media."

MILITARY IN FULL FORCE
Last night's ceremony was attended by Chief of General Staff Gen. Necdet Özel as well as the full military staff of armed forces commanders. The presidents of the Constitutional Court, the Council of State, the Supreme Court of Appeals, Higher Education Board, the Supreme Election Board as well as U.S. Ambassador Francis Ricciardione.

FLOWERS FOR EMPTY SEATS
The two rows behind the row in which CHP Chairman Kılıçdaroğlu sat were left empty for deputies Mustafa Balbay and Mehmet Haberal, who are currently being held in detention. In their place, flowers decorated the rows.

This is a translation of an article originally written by Zübeyde Yalçın, Evrin Güvendik and Hazal Ateş.