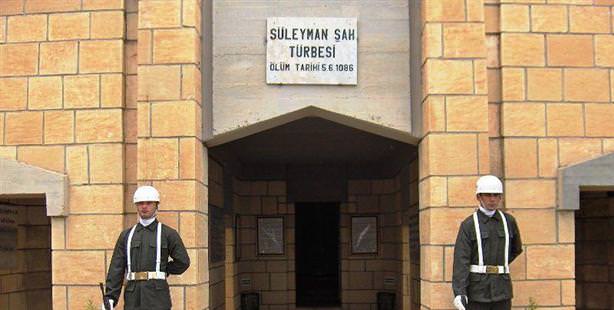 1- Any form of attack will be responded to immediately. 2- An attack on the Tomb of Shah Suleyman will not be unreturned. 3- Permission will not be granted for any PKK-tied developments. 4- If Syria creates problems for their neighbors, soldiers will also be dispatched to assist.

SABAH has deciphered the code to the motion passed by parliament, which will allow Turkey to send soldiers to foreign countries, in retaliation for the mortar fire originating from Syria which killed five civilians in Akçakale, Şanlıurfa.

According to the authority granted by the motion, any attack on the Tomb of Shah Suleyman, located in Syria however considered sovereign to Turkey, will be retaliated. Syria will not allow single-sided formations of the PKK to develop in northern Syria. If deemed necessary, Turkey will be able to send solders to other neighboring nations to Syria, such as Jordan, in situations in which their national security is being challenged.

The text of the memorandum presented to the General Assembly for a vote the day before yesterday was drafted by Prime Minister Recep Tayyip Erdoğan and his staff to the final minute detail in a session following Wednesday's attack which led into the early morning hours of Thursday.
For hours, they debated what items should be authorized for the government and what each one's potential backlash or results could surface. The motion was drafted that evening, establishing the four red lines Syria will not be able to cross. These red lines in the motion, which focuses on foreign military action, are as follows:

1- IMMEDIATE RESPONSE: Turkey will remain on alert of any further impending attacks to come from Syria. Turkey will not hesitate to respond instantly to any attacks targeting Turkish territories or national security. In accordance to international law, any sort of self defense response will be a 'retaliation in kind', which basically means that military action will be taken that is equal to or higher in force than the initial attack suffered.

2-THE TOMB OF SULEYMAN SHAH: The Tomb of Suleyman Shah happens to be one of the Turkish government's most sensitive issues. Located inside the Qal'at Jabar, however belonging to Turkey, should the Tomb of Suleyman Shah be subjected to a Syrian attack, Turkey will respond. The tomb, which is guarded by Turkish soldiers, belongs to Suleyman Shah, the grandfather of Osman, the founder of the Ottoman Empire, who was said to have drowned along with two guards while passing the Euphrates River in 1086. The tomb was made sovereign Turkish territory in the Treaty of Ankara signed between Turkey and France on October 20th, 1921. The Treaty of Lausanne also protected this right. In 1973, the location of the tomb was flooded by the Tabqa Dam and the tomb had to be relocated to its present location north of Qal'at Jabar. The 8,797 square meter area which houses the Tomb of Suleyman Shah is guarded by Turkish soldiers and waves the Turkish star and crescent flag.

3-PKK CONNECTED FORMATIONS PROHIBITED: Another issue of vital importance for Turkey is the creation of new formations in northern Syria. Turkey will not remain indifferent to PKK terrorists attempting to one-sidedly organize Kurdish groups in the region establishing in any way a threat to Turkey. Turkey will take diplomatic and military measures in the case of any situation reaching a dimension that poses a close danger to Turkey's territorial integrity or border security.

4- THE DEFINITION OF "FOREIGN NATIONS": There was a reason the motion did not solely state Syria but instead used the wording of any 'foreign nation' for potential military activity. This expression was derived in order to facilitate the Turkish government to help assists other Syria neighboring nations should the developments in Syria pose further threat and they request help from Turkey. If any of these nations request assistance from Turkey, or if the developments in Syria pose a threat to Turkey, then the military option will be laid to the table. For example, should countries such as Jordan, Lebanon and Iraq request assistance from Turkey at a time in which engaging would work to Turkey's best national interests, then Turkey will respond to the request and may beginning planning measures to send troops to the region.