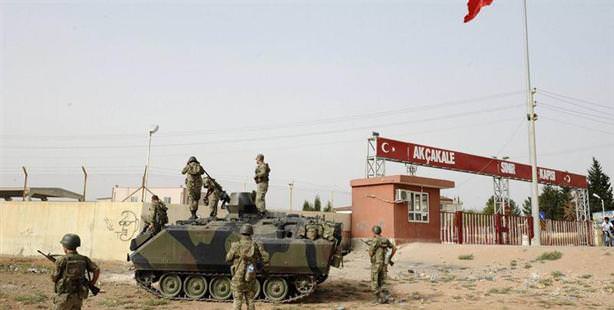 It was the sixth consecutive day of Turkish retaliation against bombardment from the Syrian side of the border, where President Bashar al-Assad's forces are battling rebels.

The exchanges are the most serious cross-border violence in Syria's revolt against Assad, which began in March last year with protests for reform and has evolved into a civil war with sectarian overtones which threatens to draw in regional powers.

The latest mortar round from Syria landed 150-200 meters within Turkey's border in the district of Hacipasa at about 3 p.m., the official said.

Turkey's armed forces have bolstered their presence along the 900 km (560 mile) border with Syria in recent days.

Once again, mortar fire has made its way to Şanlıurfa's Akçakale district, which is situated just along the border with Syria. The shelling, which landed in a garden belonging to the district Agricultural Products Office, did not result in causing any bodily harm and only minor property damage. Turkey responded with sending seven howitzers to the Syrian side. In the early afternoon yesterday, Syrian forces loyal to Assad shot mortar fire into Tel Abyad, which is located directly across from Akçakale and is mainly under the control of the Free Syrian Army. It was one of these shells, from the Syrian regime's forces, that landed near a storage unit in the garden of Akçakale's Agricultural Products Office (TMO). No lives were lost in the shelling; however pieces of shrapnel have damaged the storage units.

Akçakale Mayor Abdulhakim Ayhan confirmed that there has been ongoing shelling in Tel Abyad, and that one mortar was fired into the buffer zone. Ayhan stated, "Thank God, no one was killed. Immediately following the blast, Turkey responded with artillery fire directed at where the Syrian shelling originated from."Turkish troops fired a round of artillery following the repeated shelling in Akçakale. After mortar fire from Syria killed five Turkish nationals last week, the employees of the TMO building had luckily been given time off and there was only a security guard on site during yesterday's shelling.

Meanwhile, ongoing combat in the Syrian town of Tel Abyad, located directly across Şanlıurfa's Akçakale border, continued into the early morning hours yesterday. Assad's forces struck a number of points in Tel Abyad, currently under the opposition's control, including the Government building, in bombing which went on into the early morning hours. The sounds of shelling and blasts could be heard in Akçakale.

The Hatay Governorship has released an announcement stating that five shells hit Turkish territories from ongoing conflict between Assad's forces and the opposition in the Syrian town of Harabjoz. The statement said that for the past three days, five shells from Syria have landed in the region, some in points located 50 meters from the border, while others have landed up to 1,000 meters into Turkish territory. Last night, Turkey immediately responded to shelling that hit Turkey's Altınözü district.

This is a translation of an article originally written by Ali Balcı, Emin Özmen and Mehmet Yıldırım.