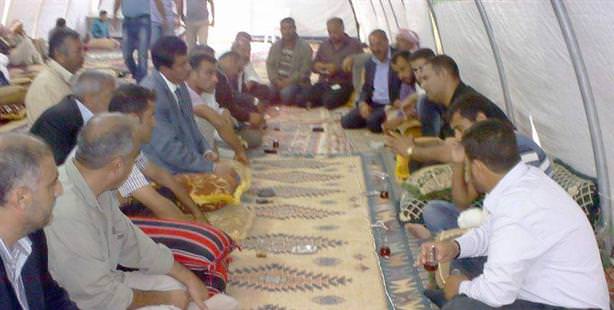 Commanders from the Free Syrian Army paid a visit to the families of the five civilians that were killed by mortar fire from Syria last week.

Ismail El Hafiyen, one of the commanders of the Free Syrian Army which is currently battling against Assad's regime which is being held responsible for the shelling, told the two families, "Your blood is our blood" during a visit to pay condolences for the loss of their loved ones. Five civilians were killed in the shelling, including a mother, her four children and a neighbor.

An additional 412 Syrians, including ten wounded and two generals, have entered Turkey to escape the situation in Syria. The ten wounded, which included women, were injured in conflict erupted in their villages or districts in Idlib and brought to the Cilvegözü border crossing in Hatay.

Once they crossed the borders, the refugees' needs were cared for as the two generals were sent to the Apaydın Camp and the rest of the group, which consisted mainly of women and children were to be sent to Adıyaman within the day.

According to an announcement by Turkey's Disaster and Emergency Management Directorate (AFAD) on Friday, the number of Syrians it is providing refuge is nearing the mammoth figure of 100,000. A total of 96,397 refugees fleeing the Syrian conflict are currently taking shelter in 13 tent cities across Turkey, AFAD said. Meanwhile, estimations are that there are currently 120,000 Syrian refugees in Turkey, including those that are not registered.