‘This is the worst-case scenario’ 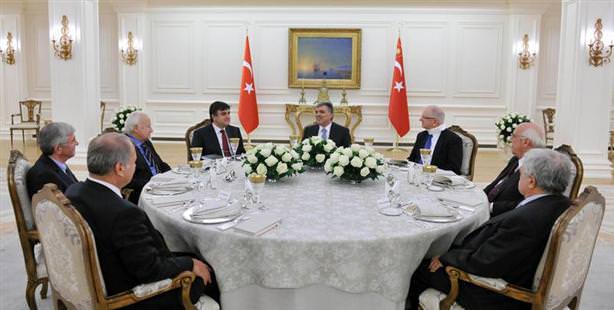 Stating that the situation in Syria has now reached the “worst-case scenario”, President Gül ensures, "Our government is in continuous contact with the General Staff.”

Underlining that the 'worst-case' scenario is now playing out in Syria, President Abdullah Gül, emphasized that the government is in continuous contact with the General Staff who are prepared to do "whatever is necessary, which is what they have done thus far and will continue to do" stated President Gül who met with Estonian Ambassador Miko Halkas to receive a letter of trust.

Speaking to the press, President Gül responded to questions regarding the situation in Syria, which he called the 'worst case scenario', stated that the Syrian public is suffering and what is happening there has now begun to affect Turkey.

WE ARE DOING WHATEVER NECESSARY

"We have lost citizens, therefore during this process our government is in constant consultation with the Turkish Armed Forces. Whatever is needed is being done immediately as you can see, and it will continue to be done so. This situation in Syria cannot be expected to continue. It certainly cannot continue as it is. Therefore, sooner or later there will be a change, there will be a transition. Our sole desire is for this to happen with no more bloodshed and before Syria has turned itself into complete ruins. I also feel that it is a must that the international community takes effective action here in order for this to transpire."

President Abdullah Gül hosted academics and members of Turkey's Higher Education Board as part of a special meeting series held at the Çankaya Palace, this time in order to exchange ideas regarding the nation's higher education system. Today, Gül is scheduled to pay a visit to the Higher Education Board (YÖK) for a briefing.

During the meeting, the discussion was centered on the direction the country's higher education system will now take, "YÖK is taking suggestions from all segments. Tomorrow, I will be paying them a visit to receive information. The higher education system is one of the most sensitive issues for me. We must establish a globally universal system that spans from the model of appointing rectors to the individual rights of our professors," stated the president. Gül also noted that state universities, foundation universities and private universities may also be included in this model. In expressing the need to establish a new system, including university financial structures and accreditation systems, Gül provided examples from all over the world.

During the meeting, Gül supposedly paid significant attention to asking everyone participating to share their views on what the new higher education system should entail. After the event, METU Professor İlham Tekeli expressed that the meeting was extremely productive and stated, "I proposed that before going towards establishing changes in the higher education system, there first be an extensive study conducted on universities geared towards satisfying professors' expectations as well as in order to measure their motivation."