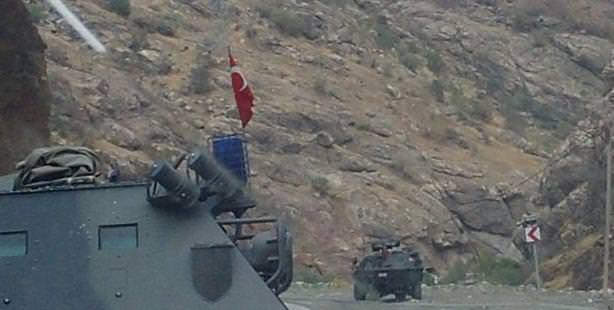 The Turkish Armed Forces has killed 13 PKK terrorists in a point operation determined by herons in Hakkari's Şemdinli district. Six soldiers were also wounded in battle.

An air-supported operation was started mid-week against the PKK in response to harassment fire targeting a security post in a rural region of Şemdinli as well as in retaliation for the planting of explosives under a bridge aimed at a military convoy that were found by security forces in the nick of time.

A team from the Hakkâri Mountain and Commando Brigade, consisting entirely of specialist sergeants and known as 'Rocket', were let down into the region where the operation is being staged by Gendarmerie Special Forces Sikorski helicopters. Yüksekova's Tactical Troop Command assisted in the operation and heron's were also used in the air operations which honed in on a series of Şemdinli districts along the Iraq border.

In the evening hours on Friday, herons detected a crowded group of PKK terrorists and cobra helicopters and Special Forces teams were deployed in the region. A group of approximately 20 to 25 terrorists were surrounded by security forces. When asked to surrender, they returned with fire, which resulted in live combat lasting until approximately nine p.m. resulting in the deaths of 13 terrorists. The remaining terrorists escaped and six soldiers were wounded and later taken to the Hakkâri Military Hospital. Military troops have proceeded to shell the vicinity of the escape route used by the terrorists.