Turkey’s tanks and stinger teams head to the Syrian border 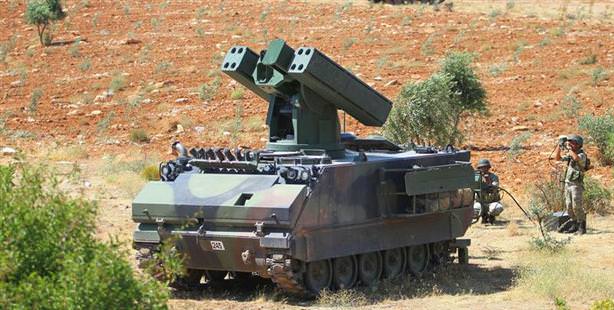 Troops along the Turkish border with Syria have now gone into ‘yellow alert’, which basically means they are ready to attack upon notice. The Turkish Armed Forces has reinforced the border region with 60 tanks and 15 F-16 fighter jets. In addition, 70 military personnel, who are trained to use the eight-kilometer range stinger missile, have also been sent to the border. These surface-to-air missiles have the very crucial capability of averting air threats.

Turkey's began bolstering military reinforcement along the border following a statement made by Chief of General Staff Gen. Necdet Özel saying, "We will respond with greater force if necessary," in reference to the Syrian shelling of the Turkish border town of Akçakale, which has led to the raised alarm level.
After the approval of a motion allowing Turkey entry into Syria was passed by the parliament the day after the strike, the General Staff was put on high alert as the alarm level along the border was raised to 'yellow', which means "being ready and prepared in the case of an attack."

Initially, additional tanks and howitzers were sent to the region. Now, anti-aircraft stingers will be included to the military's defense to protect against any incoming air threat. Seventy military personnel trained to use the stingers have also been sent to border military posts.

At the beginning of the week, Chief of General Staff Gen. Necdet Özel visited the border region accompanied by Land Forces Commander Gen. Hayri Kıvrıkoğlu and 2nd Army Commander Gen. Galip Mendi. Özel also went to Akçakale, where the Syrian shelling resulted in the deaths of five citizens last week and paid his condolences to the man whose wife, three children and relative were killed in the mortar fire. It was there he stated that Turkey retaliated immediately after the strike and said, "If the attacks continue we will respond with greater force."

Defense measures have been taken by the Turkish Armed Forces (TAF) in order to ensure full security along the border, to protect against terrorist infiltrations and to be able to respond in any harassment fire from Syria. In addition to the increased number of tanks in the region, approximately 60 tanks were sent from Şanlıurfa, Mardin and Gaziantep as reinforcement to the border region. Air bases in Diyarbakır and Malatya are also on alert. Maintenance on the runways at the Diyarbakır military airport have been completed, allowing 15 F-16 airplanes sent from Çanakkale, Konya and Amasya to be sent to the eighth main jet base in Diyarbakır. In addition to bringing in tanks, TAF has also employed artillery units and has dug new trenches for additional deployment of soldiers and armored vehicles. The artillery units also include 40-kilometer range Fırtına (Storm howitzers). The TAF's latest decision made in order to protect land troops, tanks and howitzers from any potential air strike is to bring on stinger teams along the border.

Stinger anti-aircraft missiles are used against hostile planes or helicopters flying at low elevations. These stingers are able to be used by one person, who places it on their shoulder from where they shoot. The anti-aircraft missile is directed to the target through infrared and ultraviolet radiation. The 1.52 meter-long stingers have an eight-kilometer range.