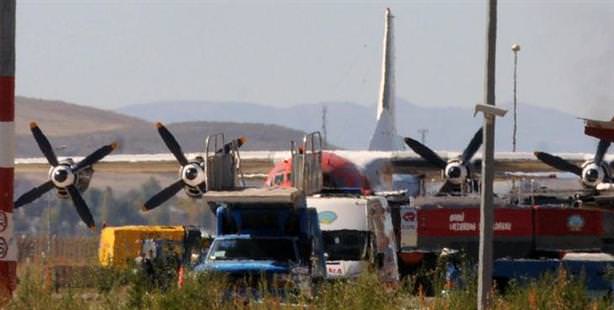 After forcing a commercial plane to land in Ankara that had departed from Moscow under the grounds it was transporting military materials to Syria last week, yesterday Turkey searched an Armenian cargo plane carrying humanitarian aid to Syria. This recent slew of events has allowed Turkey to deliver the message that humanitarian aid will be permitted to cross over Turkey while weapons will absolutely not.

Prior to the Armenian plane's take-off, it had requested permission to fly into Turkey's airspace to deliver humanitarian aid to Syria, to which Turkey allowed under the conditions the flight make a technical landing in Turkey for its cargo to be searched. A new flight plan was drafted for the flight departing Yerevan for Aleppo, which included a landing in Erzurum.

Sure enough, the Armenian plane landed at Erzurum Airport at 11:30 yesterday. The plane was parked near the VIP building and its cargo searched as previously arranged. Widespread security measures were put in place and the plane was surrounded by tracks and loading vehicles in order to block its visibility to the press.

Security forces searched all 1,400 boxes on the plane, placing each box, mainly consisting of food items such as rice and sugar through an x-ray machine. The plane's crew was offered lunch and beverages as they waited. When the search was complete, the plane departed Erzurum for Aleppo.

Foreign Affairs Minister Ahmet Davutoğlu remarked on yesterday's Armenian plane landing, by stating that Turkey will not obstruct the delivery of humanitarian goods; however it will never allow the passing of weapons to Syria. "When it comes to flights in which we do not know what the cargo entails, we will be enforcing the same principle," said Davutoğlu.

The foreign minister went on to explain that the Armenian cargo flight applied to permission to cross into Turkish Airspace on October 10th, which Turkey granted pending the plane make a 'technical stop' in Erzurum. The rerouting request was made to Yerevan 48 hours prior and a new flight plan was drafted including a landing in Erzurum. As scheduled, the flight departed Yerevan, then landed at Erzurum Airport and continued on to Aleppo.

"The plane knew it was going to be making a technical landing from the start," stated Davutoğlu, emphasizing that Turkey will never allow its airspace to be used to deliver weapons to Assad. "We can't obstruct a plane delivering humanitarian air. However, as seen in examples from the past, Turkey will from here on out be implementing the same principle on flights headed to Syria of which the content of its cargo is unknown." After the initial search Minister Davutoğlu announced that there did not appear to be a suspicious situation and said that everything was in accordance to international standards.

Backlash on Armenian's plans to resume flights in the Nagorno-Karabakh

Speaking at a press conference in Baku on Monday, Foreign Affairs Minister Davutoğlu qualified Armenia's move to operate an airport in Nagorno-Karabakh by stating, "It will damage the solution process." Referring to the move as an "unfriendly" step, Davutoğlu emphasized that Turkey has always sought peace in the South Caucasus and said that it is possible through respect of territorial integrity. Davutoğlu also noted that it was time that these frozen crises be solved.

This is a translation of an article originally written by Duygu Güvenç and Sinan Aydın.