Terrorists unsuccessful in bid to kidnap young teachers in Iğdır 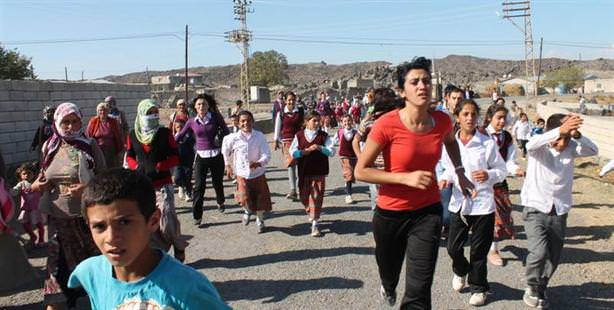 PKK terrorists’ attempt to abduct six teachers from a village school in Iğdır was foiled when villagers demanded the teachers’ release. Speaking with SABAH, the teachers recall how the villagers saved them from the PKK and state, “The villagers stood up for us and we will stand up for the children. We are not going anywhere.”

Last Wednesday, two members of the PKK terrorist organization attempted abduct six teachers from the Bulakbaşı village in Iğdır's Karakoyunlu district. Students and villagers objected to the PKK's attempt to kidnap their teachers and tracked the two terrorists down, demanding they release the teachers. In the end, the two PKK terrorists were forced to release their abductees just one hour after they had kidnapped them. Images show the teachers desperately running back to the school for safety.

SABAH had the opportunity to visit this exemplary village and meet with the students and villagers who did not allow for their teachers to be abducted by the PKK terrorist organization. As the village's 19 teachers arrived in a service bus from Iğdır, their 400 students, between the ages of 5-13 gathered in the school courtyard to greet them with applause.

Students excitedly shared with us what happened that day when two armed members of the PKK ambushed their school. Özcan, a sixth grader explains, "We were in the garden for our physical education class and were doing sprints. It was just my turn when the PKK terrorists showed up. We were so scared. I ran home and told my family what happened and they showed up at the school. They didn't let our teachers go and our teachers shouldn't let us go." Fifth-grader Esma says, "We cried so much fearing our teachers would never return. When I grow up, I want to be a teacher," she adds.

As for the teachers, some of which this was their first appointment in their profession, some which had left behind their new spouses of just 20 days; the eight female and 11 male teachers at the Bulakbaşı village school are still in shock from what transpired.

"WE ARE HERE TO EDUCATE"

Stating that the sole reasons for terrorism is ignorance and inexperience, the teachers from Bulakbaşı village state, "We need to educate these people, these children. That is why we are here."

Explaining that the villagers had the courage to grab the terrorists by their arms, telling them to, "release the teachers," the teachers say, "These villagers stood up for us because this event sprung from love and our students. However, their greatest display of standing up to what happened came in the form of sending their children to school the next day."

Village Chief Mehmet Gültekin states, "How many schools have the PKK ambushed in Turkey and how many teachers have been abducted… none of them become news. However, now everyone knows about Bulakbaşı, because we stood up for our teachers."

Speaking with some of the villagers, they said, "Each of our families sends seven to eight students to school. The teachers are here for them. If the teachers don't show up the students show up at their doors." Bulakbaşı villagers not only sent their children to school the very next day following the incident, but they also sent the teachers cheese, yogurt and bread in a gesture of gratitude.

RESTORED IN FOR DAYS AND REOPENED FOR CLASS

On the evening of October 19th, terrorists set fire to the Atatürk High School, an 800-student, two-story, 12 classroom school in Hakâri's Yüksekova district, forcing the school to take a break from classes. Since then with repairs and maintenance work, the school is now to welcome its students and classed resumed today.