Destroyed by the quake, Van is rebuilt a year later 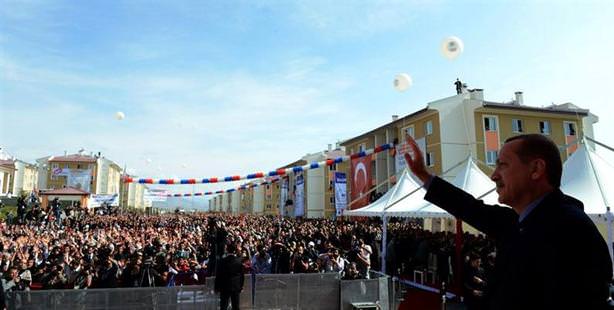 Speaking at a handing-over ceremony of 15,341 residences in Van, Prime Minister Erdoğan drew up a comparison between Japan and Turkey, “They left their earthquake victims to fend for themselves. However, we did not leave our public on their own.”

Prime Minister Recep Tayyip Erdoğan referred to the state investment in Van following the earthquake as "a necessity of the law of brotherhood". Pointing out that from the moment the earthquake transpired, the government stood by the Van earthquake victims, Erdoğan stated, "In just one year, we have made our earthquake victim citizens home owners."

During his address, Erdoğan went on to state the following:

WE USED ALL OF OUR CAPABILITIES: "As the government, we used all of our resources on this region. In Japan, there was an earthquake which led to an explosion in a nuclear power plant. The earthquake victims there were practically left to fend for themselves; however we did not leave our citizens on their own. The reason being that we have certain values in our society and duties that befall us through our religion. We fulfilled the requirements of being a great nation with a thousand years worth of brotherhood law. After the earthquake, we said we would rebuild Van within a year. I remember that night that I came here and saw what Erciş looked like. I also remember my second trip here. Hallelujah, arriving by helicopter, we just what Erciş looks like now."

'WE KEPT OUR PROMISE'

A COMPARISON TO THE MARMARA EARTHQUAKE: "Never mind permanent residences, a year after the Marmara earthquake there weren't even containers. People were struggling to live in tents. On this first anniversary of the Van quake, we are handing over all of the residences we promised."

WE NEVER CUT COMMUNICATION WITH THE EARTHQUAKE ZONE: Explaining that they have spent three billion, five million TL on the region since the earthquake, Erdoğan went on to state, "We never cut communication with the earthquake zone. We set up 75,000 tents in the region. Our Ministers consistently visited the area. With the 12 tent cities we set up that had electricity, water, canalization, medical and education centers, we provided all forms of services for our earthquake victims."
Recalling that on the 39th day following the earthquake they began to lay the foundation, Deputy Prime Minister Beşir Atalay stated, "We used brand new building techniques and now 15,000 residences are ready."

"THE ENTIRE BUDGET GOES TO VAN..."

Deputy Prime Minister Beşir Atalay explained that they initially set up 73,000 tents and then later set up 'cities' with 35,000 containers. "Our Prime Minister asked Finance Minister Mehmet Şimşek how much money was remaining after all of the budget expenditures and said it should all be given to Van."
Minister of Environment and Urban Planning Erdoğan Bayraktar stated, "While even the most advanced and modern countries have trouble dealing with redevelopment issues within a year, we have been able to create these beautiful works in just ten months. From here on out we will be completing the urban renewal of Erciş and Van. The building of permanent residences in villages is still continuing with fervor. Hopefully, we will be able to bring smiles to the faces of those in all of Erciş and Van."

A MATTER OF PRIDE

After the handing-over ceremony for the residences in Van, Prime Minister Recep Tayyip Erdoğan also attended a number of opening ceremonies one of which was for the Gökçenay Group's Van Marble factory (Van-Mer). Speaking at the ceremony, Erdoğan said that if production had been started earlier Turkey's Housing and Development Administration (TOKİ) would have used their products for the building of the 17,000residences in Van. Erdoğan went on to state that Van-Mer will have a lot of business, whether it be through TOKİ or with the urban renewal. "In fact, I believe that the manufactured products geared for exporting will also be high in demand."

Explaining that this will help decrease imports, Erdoğan congratulated the entrepreneurs for producing these products and embarking on this enterprise in Van. "This is a 50 million TL investment. In doing so, they didn't pay heed to terrorism. The fact that this is being done with our own equity is a whole other matter of pride. In addition to employ 750 people means 750 families will be able to have sustenance," stated Erdoğan, thanking the group responsible for setting up the factory.

Prime Minister Erdoğan was joined by ten ministers in Van in the first anniversary of the earthquake 7.1 earthquake that rattled the province, killing over 600 and leaving over 60,000 homeless. In one year alone, 15,341 homes, 27 schools, 24 mosques, ten trade centers and 13 kiosks were built throughout the province.