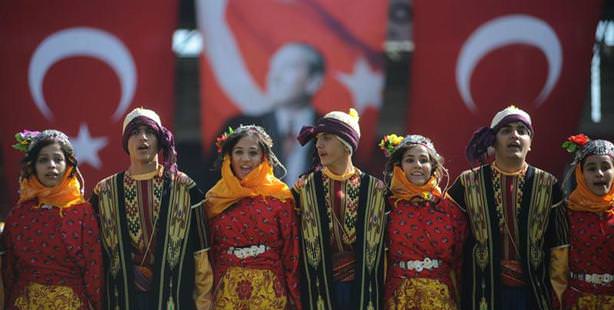 Turkey began celebrating the 89th anniversary of the founding of the republic, on Sunday, a day before the official October 29th Republic Day holiday.

Festivities began yesterday with the ceremonial laying of wreaths on Atatürk memorials throughout the nation.

Ceremonies were held throughout the nation with traditional dances and performances with a carnival-like atmosphere prevailing in most of the nation's provinces. Citizens of all ages flocked to the festivities which were generally held in large-scale venues such as stadiums. A show of traditional folk dances in Gaziantep's Kamil Ocak Stadium especially transcended into a carnival-like environment.

Turkey's Republic Day was also celebrated in the United States with a flag-raising ceremony at the Municipality in Lyndhurst, New Jersey. Lyndhurst Municipality Police Chief celebrated with the Turks attending the ceremony by participating in a traditional folk dance form Ankara. This is the third year in a row that that the Turkish flag has been raised in commemoration of October 29th Republic Day at the municipality building in Lyndhurst.